My co-worker and dear friend has gone off and left me to go back to college in another state.😔

I’m so sad she’s gone but supportive of her decision and extremely excited about her new adventure. Working with her made my job such a joy every single day. Her last day was also our last day before our holiday break. I wanted to give her a gift that was both a Christmas gift and a going away present. I hoped to make something special that would let her know how much I would miss her.

I thought about the different things I could make but in the end, it had to be a doll. Although I make and have made a variety of things, I’m a doll maker at heart and I couldn’t send her on her journey without her very own doll. But it had to be SPECIAL. Not just any ol’ doll would do. No pressure!

It had to look like her (only loosely, I’m not that good) and embody personal things about her. I knew she LOVED Disneyland and Star Wars so I wanted to incorporate that into the doll. She was going to college so something to do with being a student would be good as well. Last, I had to include something about where we worked. Our daily uniform would be perfect. Not a challenge at all!

I probably shouldn’t have tried to get tricky with the head and body. I probably should have stuck with a doll frame I had done countless times before but noooo, I had to get tricky. I started the head in the usual way, amigurumi in the round but I changed up the decrease rounds to make the chin jut out  a little. I made the face using embroidery and buttons. When done, I wasn’t sure I liked it. I kept looking at her sideways wondering if she was pretty enough. I kept going but I had my eye on her. 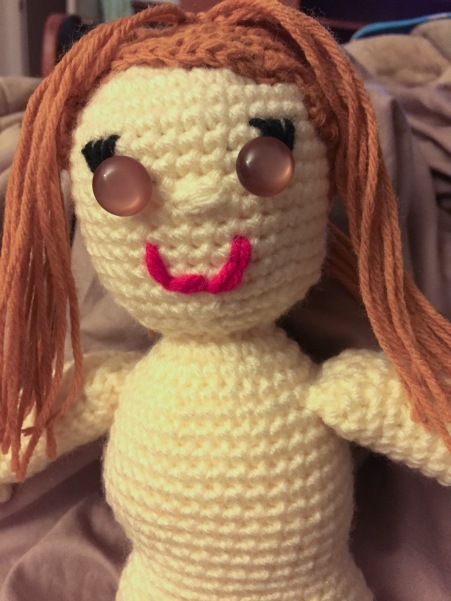 I’m not that bad! Sheesh!

Instead of making the head and body separate pieces like I do most often, I decided to go with a one piece, which I’ve done less often. I tried experimenting with the shoulders but it didn’t work out. That was the first time I had to rip back. Did I mention I was under a time crunch?…because I was. I started the doll only five days before my associate would leave and I had about a gazillion other crochet projects I had foolishly committed myself to finishing. So wasting time messing up was frustrating. I was torn between leaving it alone and trying to work with it or just trying again even though I was running out of time. I wanted it to be perfect and I didn’t think I could fix it so I undid it and tried again.

The second attempt was much better. Then I decided to make the legs as part of the torso. I had only done it once before but I felt pretty confident that it was a good solution. I did tricky increases and decreases again and started forming the legs. That’s when it started looking funny to me! ARG! Rip back or keep going? This time I kept going. It should have looked right but it just looked wrong. At that point I didn’t have enough time to try again. I convinced myself that it would look good once I put clothes on her. Done the right way, clothes could hide anything.

Normally I make complete legs on my dolls first and make shoes for them after but I didn’t do that this time. Instead, I did a color change to complete the legs and feet. I ripped that back a few times too until I got a leg and shoe shape I was happy with (finally I was happy with something). I finished up the arms and then started in on the hair. I wasn’t 100% satisfied with either but it was time to move on. 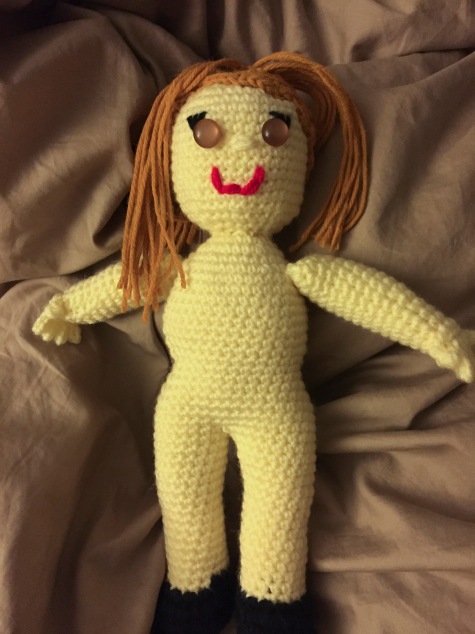 Why you so picky? I look fine!

Now came the personalizing part. I made a hat with Mickey ears and embroidered her name on the back of it. I put it on her head and it made everything better! All my doubts vanished. She was beautiful! That’s all it took, a hat! 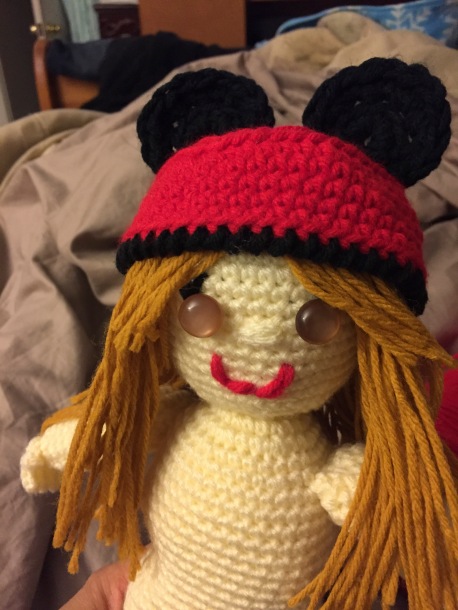 Her body shape was still giving me fits but I forged ahead and started the shirt. The yarn turned out to be too thick. I went to pull it off of her in frustration but then noticed it looked really good around her waist. I turned it into a pair of capris pants instead. They were perfect. 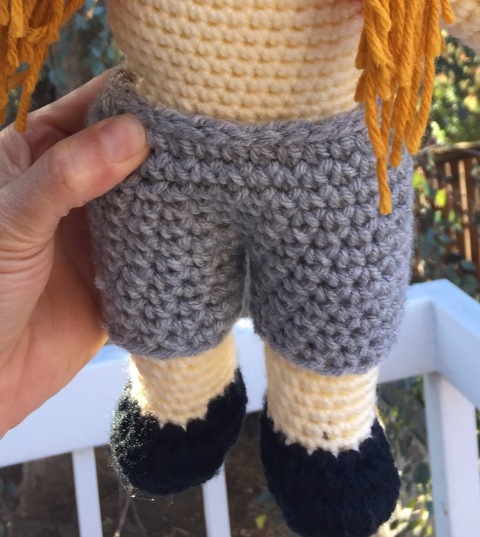 I bet you’re wondering how a shirt became shorts. Just trust me, it did.

I chose a thinner yarn for the shirt and that worked out much better. The clothes fit really well and her body shape didn’t look funny anymore. Whew! I added the emblem for our company and gave her a lanyard with our badge. She was almost done.

Lastly, I made her a backpack with the letters of her new school. I placed a small  R2D2 action figure and a tiny crocheted Death Star (I should have taken a picture) in the backpack. 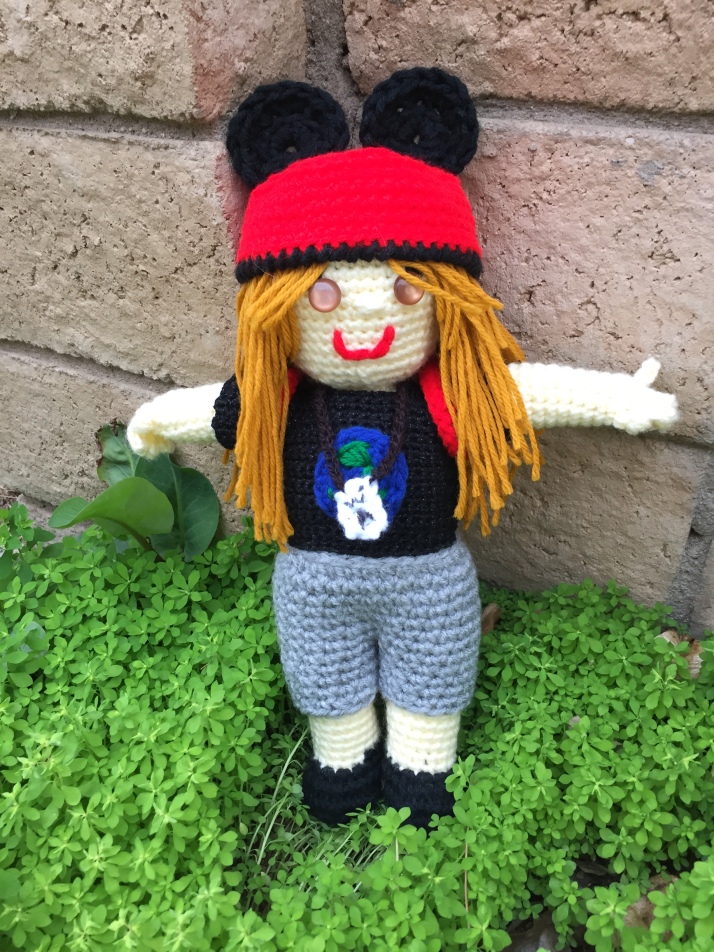 Yep, this is how we dress for work. We work with kids! 🙂 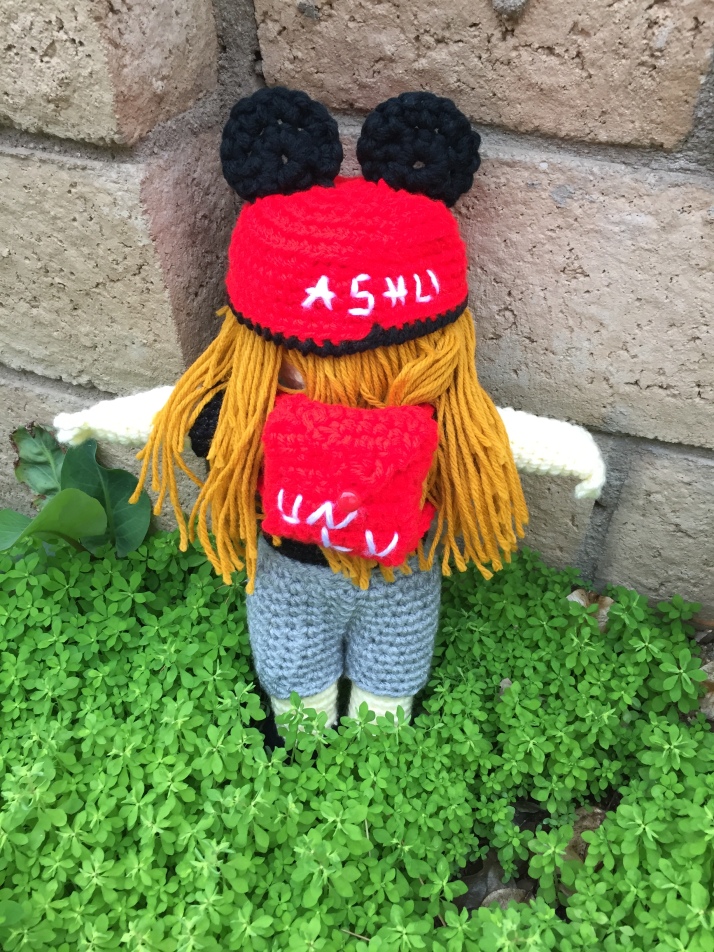 Before the doll was complete, I kept shooting her dubious looks wondering if she was a good enough gift after all but by the time I was finished, I loved her. She ended up being one of my favorite dolls. A labor of love for sure.

8 thoughts on “Crochet Doll for a friend”