I’ve lost my Tinkerbell backpack. I always used it when I went to Disneyland. It was just the right size and fit comfortably. I have no idea where it went. I think it’s around here somewhere ready to be found. I thought about buying a new one. Then I spied all those crochet squares I made for the Craft Yarn Council course I took. An idea took hold.

What to do with all those samples has been on my mind off and on since I finished the course. A blanket? Nah, I have lots of those. Purses? Maybe… A backpack? Yes! I started rummaging through what I had, thinking I could mix and match, but when I actually tried to put pieces together, I was disappointed. Why oh why did I use so many different colors and types of yarn?!

I managed to pull out 8 squares that were the same color red and lilac. I made two groups of four and crocheted them together. Then I made a long strip of tunisian crochet for the middle part of the backpack.

Not sure how I want to finish the closure yet. Zipper? Flap? Or pull top? We’ll see.

I know, I’ve gone Pokemon crazy. I do tend to get on themes until they fizzle out, only to be abandoned forever (for the moment). Remember my emoji craze (this one lasted a while)? How about the puppets? Sweater coats anyone? This current one is probably my last in this craze. A little Kinder wanted a Voltorb for Ultimate Prize box. It’s just a ball with eyes so it was an easy enough request to grant. 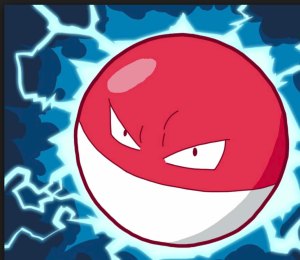 Hey, I can do a ball with eyes, no problem. Child’s play. 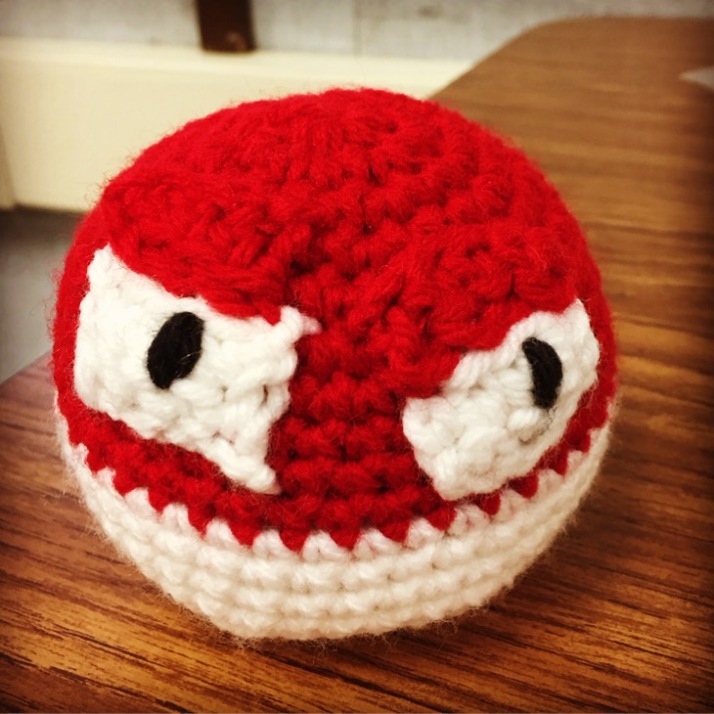 I’m looking at you!

My little Kinder didn’t lack a plethora of suggestions (he never does) and we worked the eyes until we were both satisfied. Everyone is happy. 🙂 He was literally standing next to me as I was closing up the bottom asking me if I was going to let the stuffing fall out. What am I, an amatuer? Didn’t he trust my crochet skills by now after all the things he’s seen me make, much of which were for him? Of course I didn’t let the stuffing fall out!

When I closed it up completely, he started jumping up and downing, narrating how I was weaving in the ends. Can you tell he was excited? As soon as I finished cutting the last tail, I handed it to him and he scampered off with it. It was all very cute. 🙂

I’m still looking at you!

Wish I could show you his face because he is adorable. He was even wearing a Pokemon shirt and yes, he was smiling that much. 🙂

Now I can move on to other things, like a crochet turtle for my co-worker, a backpack out of my samples from the Craft Yarn Council course I completed, and finishing up the plugs on my first sweater. Yessss, I’m still working on that! LOL