Our kids are grown (I’m including all the nephews and nieces in the collective ‘our’) so we’re done with the trick-or-treating, but my hubs and I still wanted to do something for the season. We opted to go to Coffin Creek right here in our city of Corona. It’s a Halloween themed event that’s held at the same place as the Koroneburg Renaissance Festival. In fact, some of the same people who work at the festival were working that night!

There were five attractions: a hay ride, a maze, and three haunted houses. I wanted to dress up but the hubs was all, umm, no one dresses up. I was all, ummm, of course they do! He was right, no one else dressed up…but I didn’t care. I had fun. 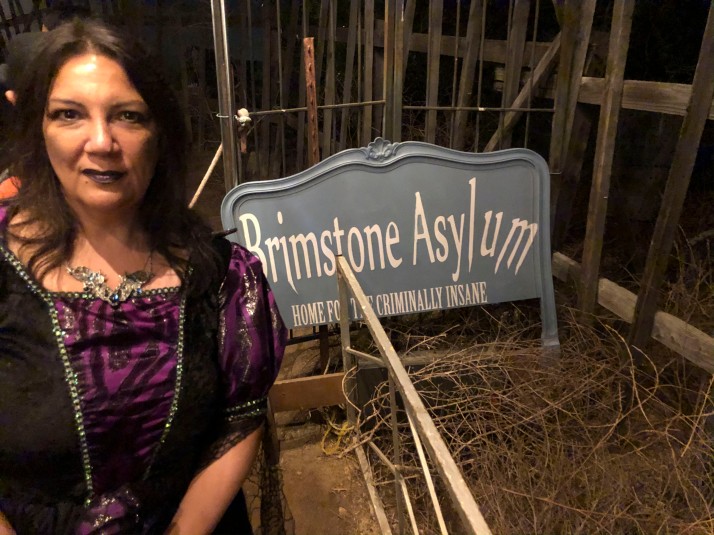 Yolanda Mistress of the Dark!

The best part was running into the lady who was part of the fashion show at the Ren Faire. I was at her booth and we started talking. She didn’t remember me at first, but I reminded her I was the one with the crochet outfit. She got excited and said I was on her flyer. It was on display at her table with all the Faire info. Squeeee! I’m on the flyer!

That’s me on the lower left!

She asked what I was making for next year. I’m not sure yet but it’s gotta be good. I better get cracking on something right now! 🙂

I have been wanting to make my own corset for the Renaissance Faire but haven’t come up with anything on my own. Today, I came across this pattern from Red Heart yarns while looking for Halloween ideas. Lately, I have been pretty impressed with the patterns I’m finding at Red Heart.

This pattern can be easily adapted for Ren Faire and I plan to give it a try.  But in the meantime, it’s almost Halloween! 🎃👻

Pattern can be found here.

This hat is super cute. It would make a fabulous addition to a Halloween outfit. Haven’t made one yet (mainly because I keep falling asleep when I get home from work) but I like looking at it and thinking about whether I would copy it as is or fiddle with it. Probably fiddle with it. I fiddle with everything. A student (several students actually) announced we needed more yarn for our yarn drawer at work. What, already? I guess it makes sense considering I haven’t purchased any this year and probably not for a few months before the end of the last school year. This was a good opportunity to check out the remaining yarn to see the dregs of what we had.

Green and Orange: what not to get next time!

I can certainly see the colors that weren’t popular! There was lots of orange and green left over with a little brown. I wanted to use some of it up and what better way to use up orange as Halloween is approaching than pumpkins! I was going to just make it up but figured I’d check out how others make pumpkins and came across this cute looking pumpkin (below).

I read the pattern and started with the same stitch count but then veered slightly my own way. I followed the pattern to the third round and got the gist of it and then just did my own thing. 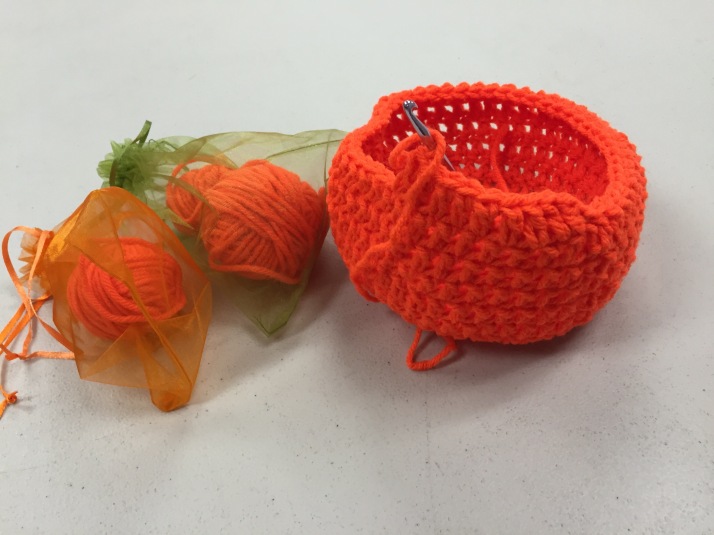 I still ended up with decent results. 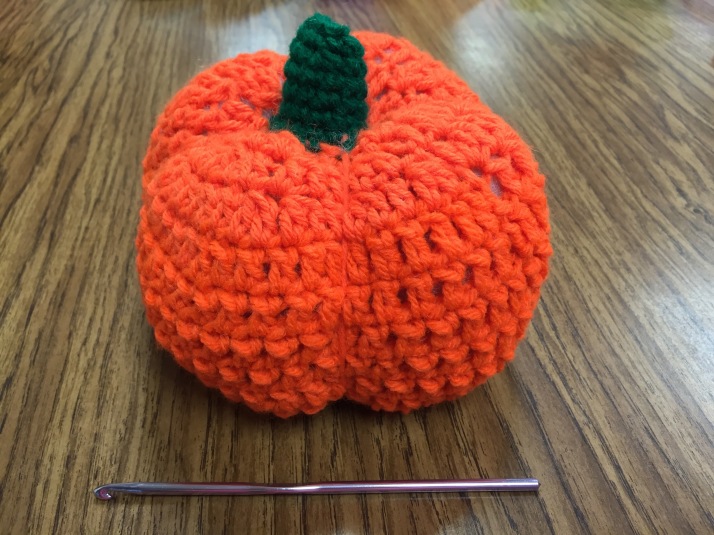 My version is not too shabby 🙂

The idea is to do 12 double crochets in a ring and then do some increase rounds followed by some regular rounds and then finishing with decrease rounds. What I really wanted to learn was how to create those indentations. I originally thought that was done through crocheting but it’s done after with a long string. The pattern has a video tutorial as well that is very good at demonstrating how to do this.

The kids thought a pumpkin was great but a jack-o-lantern would be even better so I just had to do it. I made three triangles and sewed them on to the pumpkin. The mouth was a combination of slip stitches between single crochets with picots. 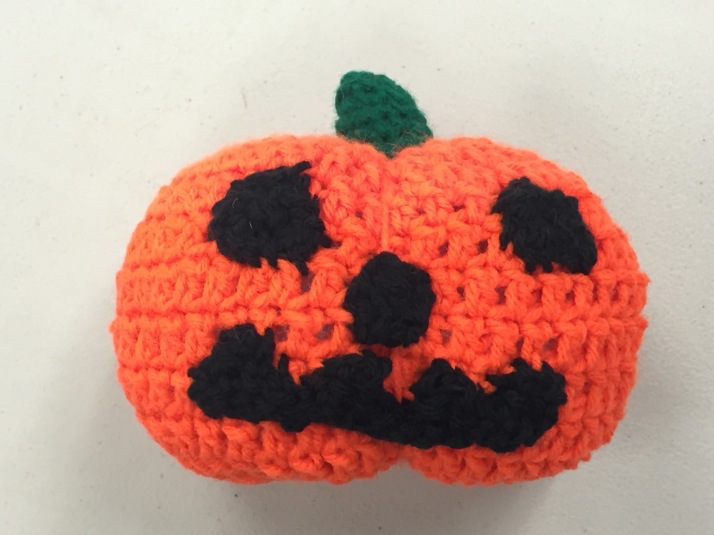 Not so sure about that mouth but the kids seem to like it. 🙂

I think I have enough orange yarn to make another pumpkin this same size or maybe a few smaller ones but I will definitely do it with single crochet. I don’t like the resulting big holes from the double crochet.

Now I have to figure out what to make with all that green. Maybe some green monsters. 🙂

Can you smell Halloween in the air? My students are already telling me how excited they are about Halloween. Me, not so much. Didn’t Halloween just happen? It feels like yesterday. If it’s almost Halloween, it’s almost Thanksgiving, almost Christmas. That just means another year is about to end. But didn’t the year just start?! Oh well, I do love Halloween. So, getting into the spirit of it all, I came across this really cute superhero dream catcher afghan. So for all those Spiderman fans out there, this one’s for you!

We did our ghosts at work and the kids had a blast. I was worried it would be a little hard for some of the kids (and it was!) but as my associates and I worked individually with some of them and they learned the technique, the kids were so proud of themselves. Here are the fruits of their labor. 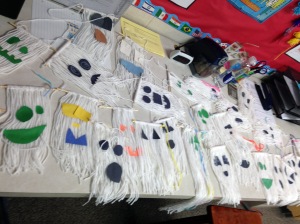 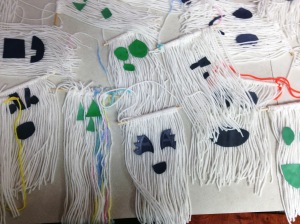 We hung them around the room and they very proudly show them off to incoming parents. Very fun!

In the spirit of Halloween and one of my all time favorite holiday movies (is it Christmas or Halloween?), I found this free pattern that can be found on Ravelry. It looks awesome and I can’t wait to try it out. Enjoy! 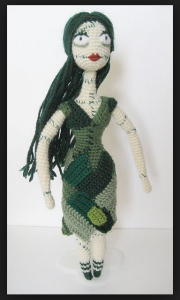 I came across this cutie while searching for Halloween themed crafts to make with the kids at work. I’m always on the look out for fun and easy projects and when it involves yarn, I get extra excited. Looks easy enough for my Kinders and 1st graders to accomplish but still challenging enough for my older kids. Can’t wait to try it out. I think I’ll challenge them to experiment with different faces.

This looks self-explanatory but this is where I got it from here.