We’ve had a very wet winter this year after some years of drought. I live in the Inland Empire in California and when that happens, we get an explosion of wildflowers that are very beautiful. Not too far from where I live, we have some hills that are covered in so many poppies, the hills look orange.

The city of Lake Elsinore (near our home) became a tourist attraction almost overnight! They were calling it the Lake Elsinore Super Bloom. How unlucky for us because we get our taxes done over at Lake Elsinore and we hit crazy traffic. Why? Because of Poppies. The hills look amazing but it sure made getting to our appointment hard. The freeway was a parking lot and the streets were worse. We kept getting detoured and lots of people were walking on busy streets with no sidewalks! I’m not talking about little residential streets either. We had to be extra careful not to hit anyone. Even with all that, we were only ten minutes late to our appointment (we left very early).

I managed to get a few shots from out the window as we drove passed. Hence why they’re lousy but I had to try. I just couldn’t do the scenery justice while hanging out the window. LOL

This is the best picture I was able to get while risking dropping my cell phone on a busy freeway!

I shot this one before I thought to open the window. It’s hard to read but that sign is asking that people not pull over because people were parking on the freeway!

You don’t see as many flowers in this one but I liked the rocks. 🙂

I wish I had been able to get pics of the crazy crowds on the side of the freeway. It was madness! I would have loved to stop at one of the trails that went through the poppies but I wasn’t about to deal with that many people for some flowers, as pretty as they are and all.

How to avoid cleaning my office…

Crochet of course! I had good, nay, great intentions when I opened the door to my office. It’s gotten a bit cluttered and it was time for a little spring cleaning. I didn’t even walk in all the way when I spotted a naked doll I had brought home from work just sitting there. How long had she been there? Over a year?

That got me thinking about how that poor baby doll had also been languishing in a drawer at work for a long time before I brought her home. The kids can’t handle naked dolls. There, I said it. They take all the clothes off and then shenanigans happen AND THEN I have to confiscate.

I know part of the fun is dressing the dolls, but if they stayed clothed, there would be no problem. So I ended up with a drawer full of naked dolls waiting for me to make them some permanent, absolutely can’t take off, clothes. All the other dolls finally got some outfits, but for some reason, this one was still sitting in my office. You can see why I had to put off cleaning my office to finally make her an outfit. 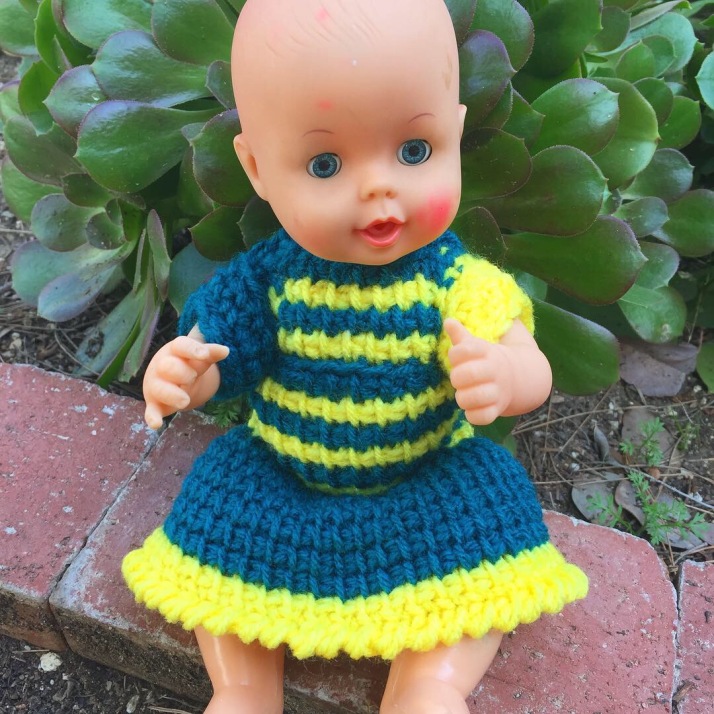 For memory’s sake, here are two of the other dolls.

I’ve been working furiously (again) on my crochet book on dolls, and though I’ve missed a couple (only a couple!) of self imposed deadlines, I realize now that I probably won’t finish until summer. BUT, I’ve made tremendous progress! I’ve rewritten, re-photographed and new-photographed a ton, and I feel so happy with the results.

One of the problems I’m having is that some of my older photos aren’t as good as my new photos and I’m working on figuring out what to keep and what to reshoot. The biggest problem with reshooting is that I don’t have some of the original dolls that I would like to re-photograph. Instead, I have to try to Photoshop the original shots or make new dolls entirely, which takes more time. Photoshopping takes time too, and I’m not as skilled as I should be with that.

So I’m somewhere in between. I’m salvaging what I can, reshooting what I still have, and remaking what can’t be saved. I want my book to be something I can be proud of, and I’m feeling pretty proud right about now.

Here are some pieces waiting to be sewn, stuffed, and photographed. I still need to make another two pairs of legs and then I’ll make some dolls to go with those pieces. I’ll end up with at least four new dolls.

I took this little guy from work (I sneaked him out of the Ultimate Prize Box) and gave him a mini photo shoot. He can make an appearance in my book now. Look how happy he is! Don’t tell him he still might not make the final cut. 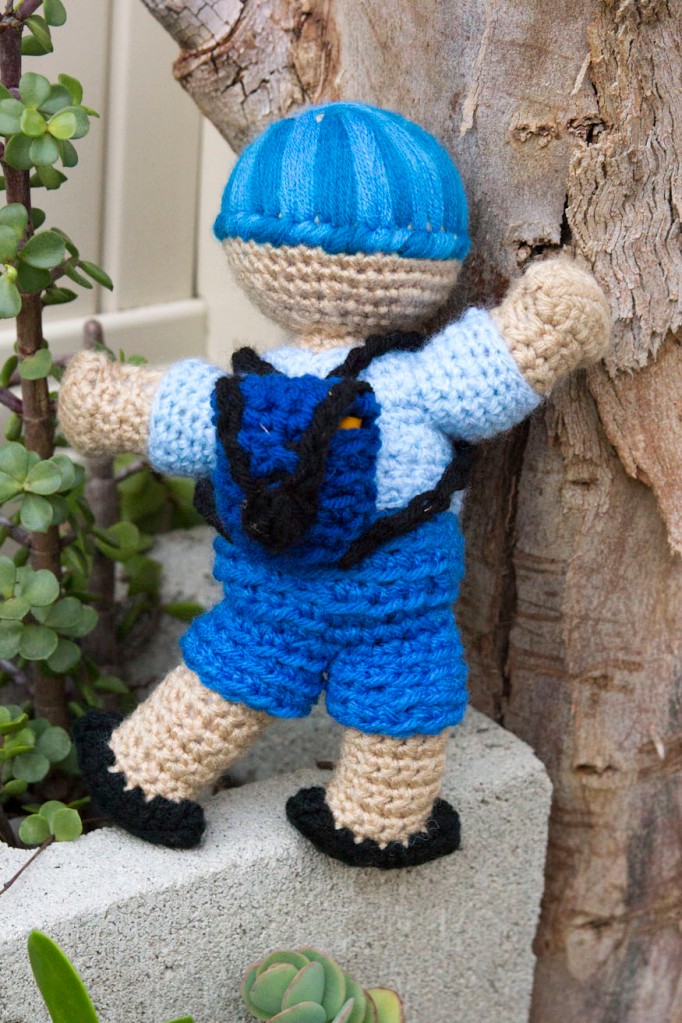 I have SOOO much scrap yarn at work! You can imagine all the little leftovers I end up with after the kids are done making the world’s longest chains. I wanted to use up all the little strips and tiny balls in a fun and creative way. The kids love Pea Shooters and the green one I made was a big hit so…

This pink and red Pea Shooter was conceived right before Valentine’s Day. I had a lot, and I mean a lot of red and pink scraps of yarn. The kids really love using those colors. The kids kept questioning the work in progress, I assume not trusting what I was making. They quickly pointed out that there was no red and pink Pea Shooter in the game. I told them to trust me.

When I was almost done with it, they got more and more excited. Some of them asked me what it was. I told them it was a ‘Mrs. Sherman one of a kind limited edition Valentine’s Day special heart Pea Shooter!” They got super excited after that. 🙂