Mini Me’s Surprise Sister So, while I was working on finishing Mini Me, who was planned, thought out, and carefully created, her little sister accidentally sprang into creation right alongside her. My project bag was littered with loose body parts (doll parts!). These parts have been hanging around for quite some time just waiting to be joined to some finished project. There was a head that turned out smaller than I wanted so I threw it in the bag. There were some arms and legs that I made for illustrative purposes for my book. I threw them in the bag too. I eventually decided to make a body for the head and got about halfway through it  and started something else so that was rattling around in the bag too.

Doll arm waving “hello”…why would anyone find this creepy!?

When I started working on Mini Me, I needed to use that skein of yarn that had that unfinished body attached to it. No problem, I thought. I could just use the other end of the skein to work on Mini Me. I’ve done this many times in the past so I pushed that half body to the side and created Mini Me. The more I pushed that half body to the side, the more it nagged me that it wasn’t finished. I blissfully ignored it when it was just hanging around in my bag but it could be ignored no more. Plus, my family was really getting creeped out seeing all those disembodied body parts floating around in my bag. Personally, I didn’t see the problem but I decided to try to finally make a home for all those parts. Once Mini Me was done, I finished the body attached to the other side of the skein. Turns out the body was thinner than I thought the head needed AND it was a different kind of yarn than I’d used tor the head (so the shade was slightly off). Wwwwellllll, I wasn’t about to make a new head for the new body – that would mean the “floating” head I had would still be cast off in the bag again – so I attached it anyway.

The head finally got her body. Those are her new legs next to her. Her ‘almost’ arms and legs are in the side bag at the bottom.

I pulled out the extra limbs I had, two arms and two legs, and realized the yarn for those matched the head but not the body and they were too short and fat for the accidentally-too-skinny body. I couldn’t do it. I could not bring myself to attach them to the body. I was already thinking the body was too skinny for the head and I just couldn’t add insult to injury by attaching short, stubby arms and legs too…I couldn’t do that to her (she might already have a complex). Instead, I made brand new arms and legs that fit better. Meanwhile, Mini Me was getting jealous because she was being ignored. She was still bald and naked and waiting for her clothes while I was tinkering with her unplanned sister. I have to admit that Mini Me is my favorite but I have hope for my “Frankendoll.” So now I have two dolls that have to be wigged and clothed and they don’t even like each other. I hope the rivalry ends once they realize I have room in my bag for both of them. I hope I can come to love my surprise doll as much as I love Mini Me but only project completion will tell. 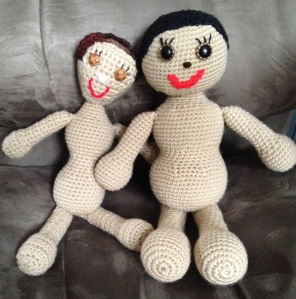 Now they are both indecent! But at least they’re pretending to love each other.

After all that, I still have disembodied body parts in my bag!

This is the progress on my look a like doll.

I think the eyes worked out nicely. Now I’m planning the perfect outfit and accessories.

I’m really loving her already. Usually I have a ‘hate them at first’ relationship with my dolls. I want to love them of course, so I do everything I can to make them beautiful. Once the process is complete, then I love them (usually). But sometimes, I love them right away. Then comes the stress of possibly ruining that great love because I know it can all go wrong if the hair and clothes aren’t just right. Those things make a big difference to the finished doll.  But for now, before the hair and the clothes possibly spoil the love affair, I love her.  🙂

Okay, we won’t be identical twins but fraternal twins definitely!

Today I was going to pull out a box of crochet toys I made for my daughter when she was little and photograph them. I wanted to write a post about how I started my love affair with making whimsical things. I had it all planned out, and went digging all through the garage looking for said box of nostalgia. To my horror and dismay I couldn’t find it!

A bit of back story before today’s tale of woe is in order. My daughter held on to these toys up until she was a teenager. Then it gets fuzzy as to what happened to said items (and there is some debate about it between us). At some point, her Barbies and all the doll furniture and doll clothes I crocheted went into a box. She claims I took them from her in order to protect them. It could have gone down that way. Then she went to college and eventually moved out. I’m not sure when it happened but I’m pretty sure I asked her to take them or I was going to get rid of them. Here’s where it gets fuzzier.

I asked her about them a few years ago. Something along the lines of “Do you know what happened to your old crochet toys I made you? Did you take them?”

END_OF_DOCUMENT_TOKEN_TO_BE_REPLACED

I finally finished the second Minecraft Steve Doll. I made a few changes on this doll from the first one that made it easier to put together. With the first doll, I started with one large panel for the head and one large panel for the body. I crocheted in the front or back post to create edges where I wanted them. But then, for the arms and legs, I had the bright idea to make a panel for each side. At the time, I was thinking that it might create a better edge. However, I ended up having to sew up so many sides I was going cross-eyed. I also didn’t use the best sewing technique I could have to get better edges. For the first one I seamed with a whipstitch. On this one I used something different. I’m not sure what it’s called (I searched the internet with no results to my utter frustration). I also made the arms less wide than that first doll. The end result of that first doll was good but I think this second doll was better.

Here are all the panels I made for this doll.

This is the head in all it’s glory.

END_OF_DOCUMENT_TOKEN_TO_BE_REPLACED

I feel like I don’t have enough time to work on all the crochet projects I want to work on. I have two baby dolls I promised to make my mother in law, a doggie sweater for my daughter’s puppy and a doll that looks like me.

I also want to create a Frozen Elsa doll. I’ve had a lot of request for that so I definitely want to make one. I’m in the ‘imagining’ stage for that one. I’m picturing how big I want it to be, what yarns I might use, how to make the dress, which buttons I’ll pick for the eyes, which method I’ll use to shape the head and so on and so on 🙂

Today I’m working on my crochet doll look-alike. This is a doll I’m making so I can tighten up a pattern in a crochet book I’m writing. I want to make sure it works. It’s also going to have other uses to represent my book so it’s really important for this doll to come out right. I’m working on the head right now and I’m trying to select the perfect buttons for the eyes from my stash. I think I’ve narrowed it down to two sets. They are almost identical except for the size. One set is dark brown and the other black. I’ll decide which size is best when I finish the head so I can see which size works better. I’m leaning towards the dark brown ones so hopefully the finished piece can support the bigger eyes.

I love the part where I get to go through my stash of buttons to select the prefect ‘eyes’ for the doll that’s about to be born.

Is anyone surprised? I didn’t think so. I was so done with making Baby Yodas. In fact, I was so done, I gave my personal and large doll to one of my sisters so I wouldn’t have to make another one. But then, a few months had passed, and my daughter asked if I was […]

The doll is finished and delivered. It didn’t have far to go, just down the hall. But first, the doll demanded a photo shoot. Kinda reminded me of my husband. 😊 My hubby wanted his own Mini Me in his music persona. He creates music and wanted a doll he could photograph as a stand-in […]