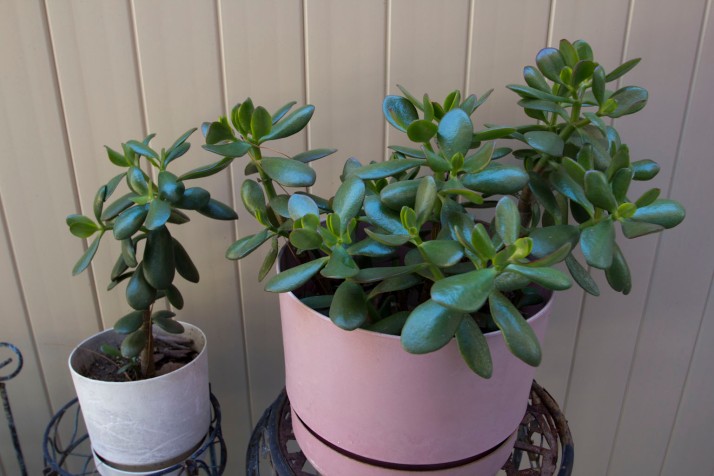 Look how lovely we are!

I’ve written about this plant in my home before. This plant makes me feel like I’m not a complete plant killer. This plant can be propagated from any of its parts and it’s soooo easy! I can take any stem piece or any fallen leaf, stick it in the ground or in some container with the worst soil, and it grows.

Recently, we’ve been in the process of beautifying our home. We had considered moving but had a change of heart and decided to put our money into our home instead. We started with the outside by painting the house, replacing our dilapidated fence, and the nicest of all, properly landscaping the front yard. I made sure there would be hardy, waterwise plants out front that could survive my black thumb. I was assured that there was little I would need to do to keep them alive.

Unfortunately, we don’t currently have enough funds for professionally landscaping the backyard, so it’s in a very raw state. Nothing but dirt with broken sprinklers, so I have to manually water whatever plants are back there. Which is why I love my survivor plant. It gets watered when it rains and it hardly ever rains, and it’s still standing.

My sis-in-law often jokes about my garden with only one plant and I brush it off. What does she know. She can’t possibly understand my relationship with my hardy survivor. But now that we’re beautifying the house, I thought I could liven up the back a little bit. We do plan on saving up to properly landscape, but in the meantime, I could try some things with no fear I would mess anything up. So I took some of my plants and started planting them all over the place. I went to my brother’s house where he has an over-abundance of  rocks in his yard that he doesn’t want. I loaded up my little car with rocks!

Why rocks? Well, we paid a pretty penny for some boulders that were placed in the front yard. My frugal heart ached from having to pay for rocks! I could pick up free rocks myself and there were plenty at my brother’s house. He even had these three boulders that would be perfect in our landscape. 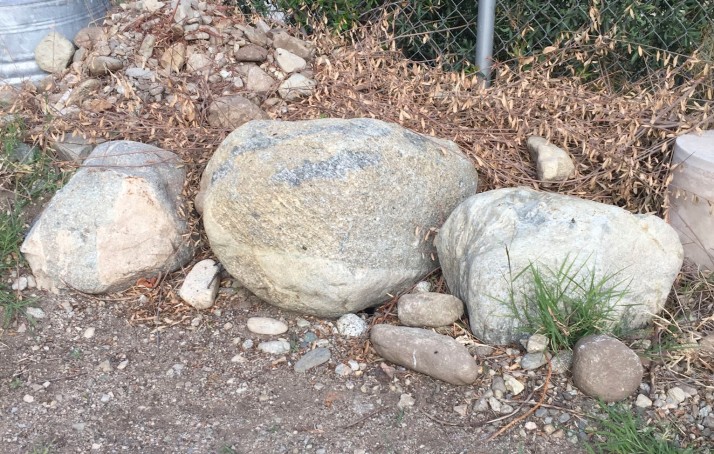 The boulders that tried to kill us. We were able to load up the two smaller ones.

So, armed with my sister, we headed over with the intentions of taking those boulders with us. They weren’t that big, but I knew they were heavy. The first one was a chore but we managed to wrangle it into my tiny car, I was that determined.

After a couple of cut hands and a few bruises later, we went after the second rock. That one was slightly bigger and heavier and I almost gave up on it, but my brother helped us get it into my car. It was a near thing. We almost lost a couple of toes but we made it. He asked if we were going for the third and biggest one and I had to concede defeat. If it took that much effort with the other two, there was no way we could handle the biggest one.

With at least two boulders in hand, I collected a bunch of more manageable rocks, from small ones that fit in my hand, to larger ten to 15 pound ones. I was armed and ready to tackle my backyard. When I got home, I was lucky hubby was there because there’s no way my sis and I could have gotten those big rocks out, but my hubby wasn’t too happy I risked life and limb (and my brother’s and sister’s too!) to bring home free rocks. LOL But he helped us just the same. I thought I might take these boulders to the backyard, but suddenly, it seemed far far away. Instead, we pulled them out of the car and dumped them in the front yard right next to the car and they looked beautiful right where they were! I took the smaller ones to the backyard and got to work. 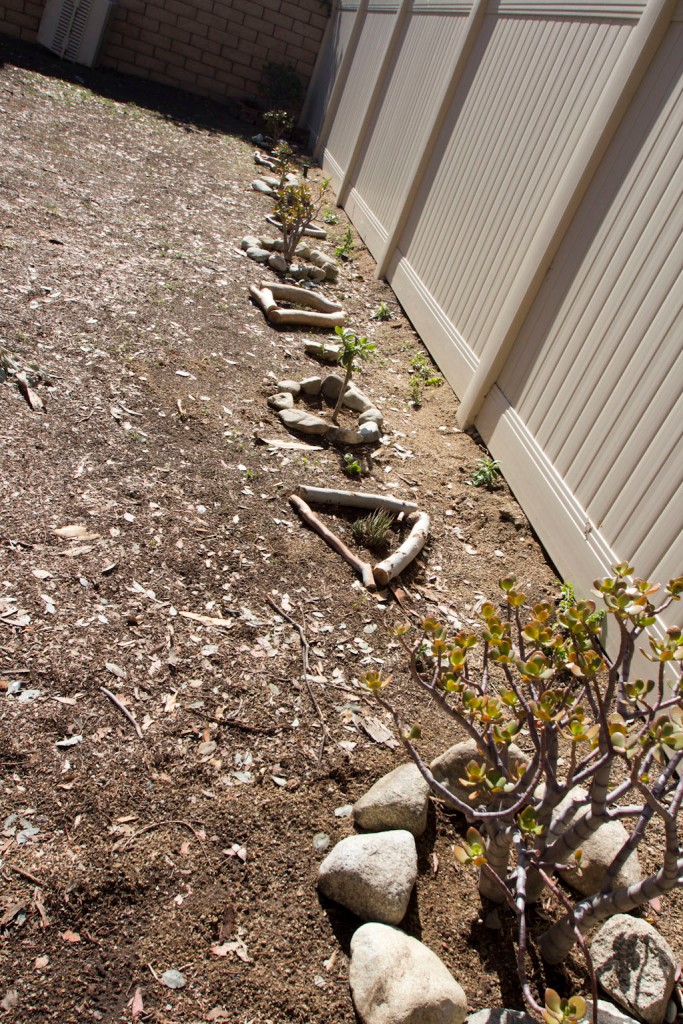 Then the family came  over and I proudly showed off my handiwork and they agreed it looked better than before but my sis-in-law reminded me that there were other succulents that might work too. Bah! I turned to my sisters and asked what they felt about my hardy plant and one said she felt like my plants were going to reach out and strangle her. She said this with a smile but I got the hint. 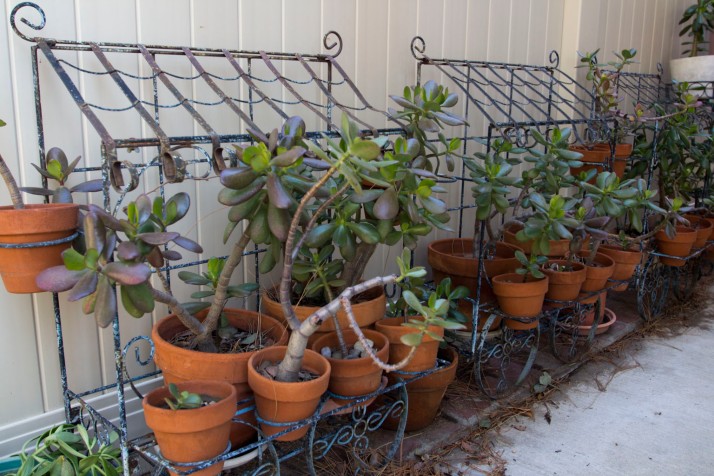 We WILL strangle you! Nah, we are very loving. 🙂

I have a co-worker who is a succulent queen. She told me I could have as many cuttings as I wanted. This was perfect! I could try other plants for free and if they died, no harm no foul. When I got to her house, my first thought was, “I’m not worthy!” I can’t even describe how amazing her succulents were. She started clipping and cutting and telling me what they were and how to plant and care for them. I reminded her I was only looking for the hardiest and ‘Yolanda’ proof plants she had. I don’t think she listened. There were too many instructions coming my way.

I was starting to get nervous. I just wanted plants that were like my plant. Give me the cutting, I plant it anywhere and it grows. She gave me so many varieties. Some were so pretty and some were very interesting and some didn’t look hardy at all. When she was done, she told me NOT to plant them right away. They needed a few days to dry out. Oh oh, this was starting to sound like green thumb material. But ok, I could wait. I left all my cuttings in the box they came in for a few days (I don’t think I was supposed to leave them all bunched up in the box), not really understanding why I had to do this. I also tried to remember all the other things she told me to do. Something about NOT planting them to propagate them and succulent soil (what is that?) and let the roots grow before you plant them and other such nonsense that went over my head.

Well, I waited and then just did what I know how to do. I did make the effort to buy some soil but I didn’t find any succulent soil so I went with your garden variety, all-purpose soil and spread that around in my garden beds. The directions said to mix it with the soil but who has time for all that? I just spread it on top. Then I started planting what I had. It would mix when I dug the whole, right? I thought it all looked pretty. I got around to watering it all after a few days (did I mention I’m a terrible gardner?). 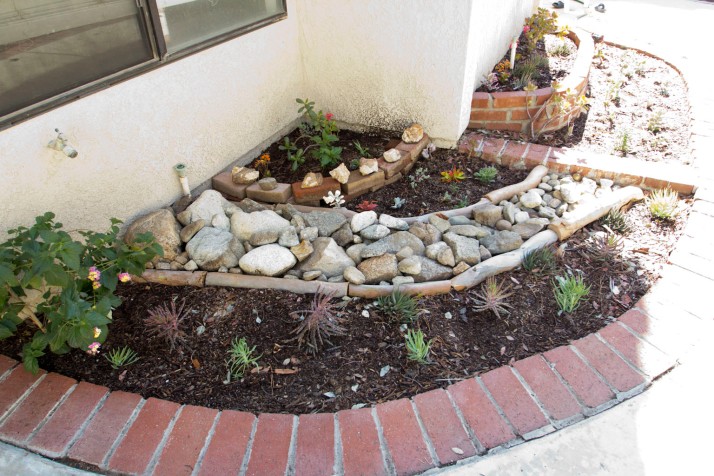 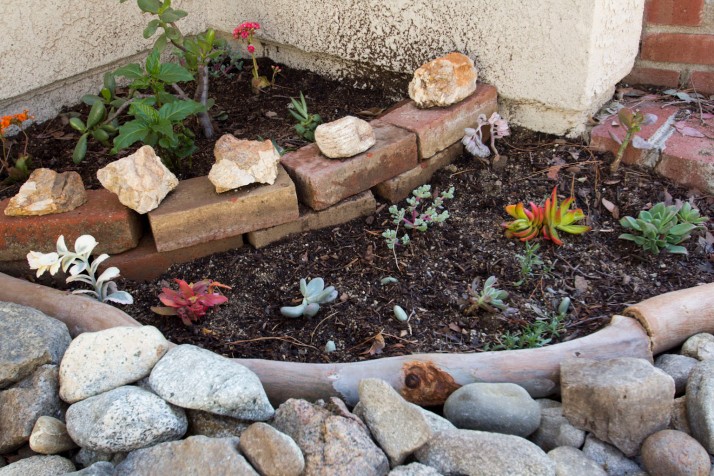 After I planted and arranged rocks, then I decided to look up all the words my co-worker was throwing at me and, no surprise, I did it all wrong. Apparently there really is a well- draining succulent soil where you’re supposed to lay out cuttings. And now her words made sense about how you don’t actually plant them in the succulent soil. And something about they need some sun but not too much sun and keep them moist but don’t over-water them! Oh no! Too many instructions! But at least I now understood all the wisdom she was trying to impart. 🙂

Eh, it’s survival of the fittest back there. Either they’ll live or die but only the strong and worthy will make it. I get the feeling that in the end, there will be only one…again. 🙂

19 thoughts on “Attempting to Grow Succulents”