Initially I had planned to do separate posts about my progress on the second course of the Craft Yarn Council’s Teacher Certification program. Time got away from me, though, what with going back to work and being crazy busy with getting back in the swing of things. We’ve been back a full week now and I had a breakthrough moment with one of my 4th grade girls and single crochet, but I digress, that will be for another post.

Back to my swatching.

I have completed most of the required swatches for the program and have left the required lesson plans and the sweater for last. The sweater will be considered the final exam. I won’t go into the gory details of each swatch, only the more interesting ones but I will say that I made each swatch at least 3 times trying to make them perfect. Some required a lot of undoing and redoing to get the right gauge, but in the end, I was happy with the results.

No yarn tails in sight!

This one was the hardest in the sense that I found the directions confusing. It took me a few days and some research just to figure out what they wanted. I’m not sure if I did this one right but I’m pretty sure. Someone (Jo) commented on one of my previous posts that a newsletter with pictures was sent out with corrections! What the what!? I didn’t get any such letter. She said it looked like they allowed floats along the sides. Before I read that comment, I debated about whether I should carry the yarn on the side but since they didn’t ask for a border, I decided to weave in the million ends I had when I was done. Add to it that the red rows were very thin, making it that much harder to weave in the ends neatly but I think I nailed that part.

The Mesh Square with Filet Pattern

Can you see the boat?

Doing the stitch on this one wasn’t hard. What was hard was using thread yarn and my teeny, tiny steel hooks. I have a set of steel hooks that I have never used. I’ve had them for a long time. Not sure if I bought them or if I got them from my mom but I’ve had them awhile. I have them just in case there is a crochet emergency where I have to, just have to, make a doily or something. Luckily, I’ve never had such an emergency, until now. Now I had to make a swatch using #10 cotton thread yarn and a steel hook. I hated it. I had to pull out my good reading glasses and learn how to get the right gauge using that slippery yarn. My tension was off too. I changed to smaller and smaller hooks to get the right tension. Then I had to work and rework the square to get it centered right. In the end, I just left more mesh on top than on the bottom. At least it was centered from side to side. The example in the manual has one mesh row on the bottom and two on top so that’s not centered either but mine has two on the bottom and I had to add four on top to make it 5 inches but I just left it for now. I might redo that one later but it’ll do for now.

I’m glad I was forced to use my steel hooks and thread-yarn because I’ve been wanting to make tiny dolls and now I’m more comfortable giving it a try. I’ve never used thread to make dolls so it should be interesting. 🙂

I had never tried hairpin or broomstick lace and was a little nervous about it. I didn’t have the required tools for these stitches and I wasn’t sure I wanted to invest money into said tools just to make swatches. However, if it was a technique I liked, it couldn’t hurt to own them. I went ahead and bought the loom for the hairpin lace. I was slightly disappointed with how flimsy it seemed and it was the best one I could find! It got me thinking I could probably make a better one myself. We’ll see…

I studied videos and read tutorials and wasn’t feeling it. It didn’t seem like something I would enjoy doing. Once I got into actually trying it, it was a lot of fun. After I finished my swatches, I had to figure out how to join them. I went with the woven method and even wove the sides. The directions didn’t mention the sides but they looked messy to me and so I wove those too.

The broomstick lace called for a very large broomstick pin or knitting needle. I didn’t want to buy one just yet so I went in search of a real broomstick. Believe it or not, I ended up using a toy lightsaber that was laying around. Yes, we have lightsabers just laying around. My hubby and 17 year-old son (and his cousins) still have battles. 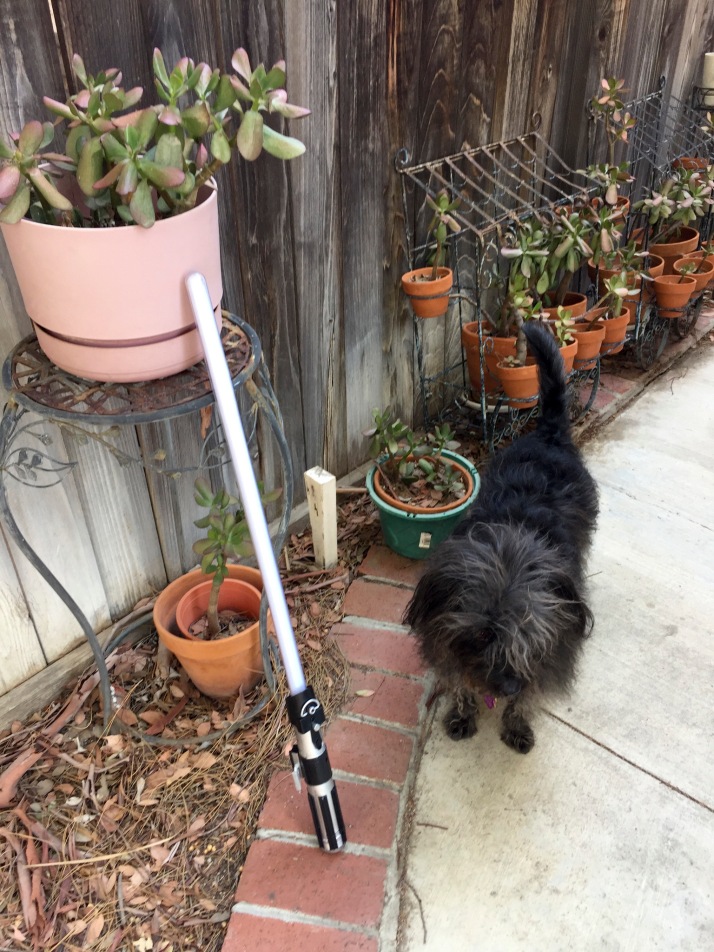 Doggy is so nosy, I just had to leave her in the shot.

I looked ridiculous with a three foot lightsaber  on my lap working the broomstick lace but it got the job done! 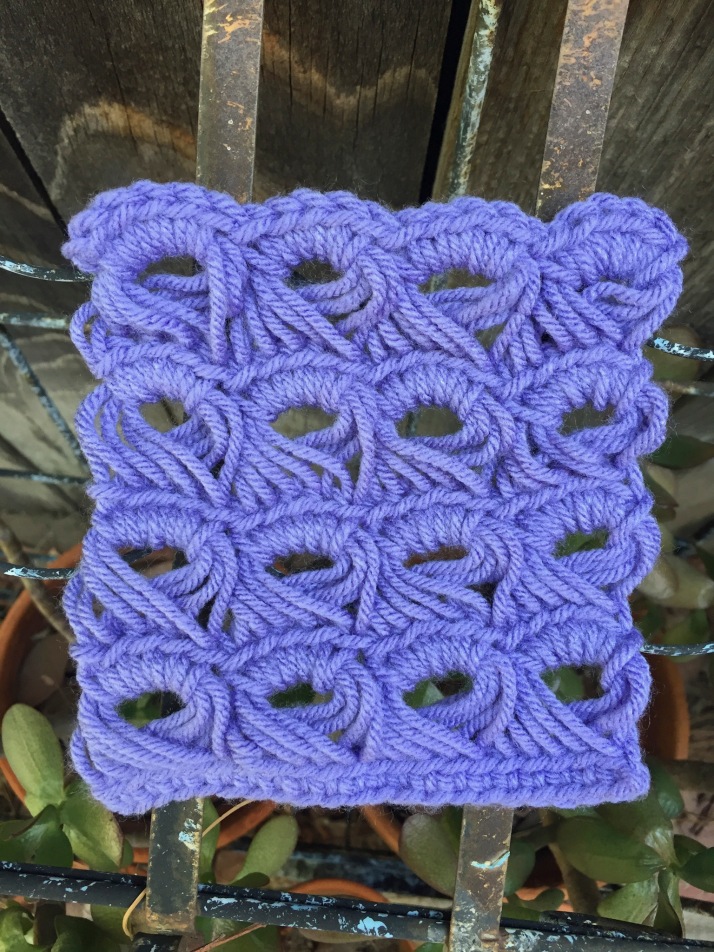 I liked this more than I thought I would.

Now that I know how easy and fun it is, I will probably make my own broomstick (you didn’t think I would actually go buy something, did you? 🙂

I had a love hate thing going on with intarsia crochet. I’ve tried this before and got frustrated with it and gave it up. But here it was again rearing it’s ugly head. I HAD to learn it now. This one took me many tries before I figured out how to move the yarn around so it would look good on both sides. I think I finally got it.

I’m glad I had to do this method because it was one of those things I always wanted to master but never felt a strong enough need to actually do it.

I want to go into more detail about this one so I will do a separate post about this swatch and the shenanigans that ensued.

Going through the course has made me pretty expert at gauge and blocking. These were things I never worried about before but I’m so very glad I have these skills now. I’m also glad I was forced to try stitches and techniques that were new to me because knowledge is power and I want to be a powerful crocheter. And some of these stitches were just plain fun.

Now on to the final baby sweater and lesson plans. Charge!!!