In looking for ideas to make a crochet tooth for my son’s dentist, I looked over the patterns I found and  thought them confusing. I probably could have figured them out if I had invested more time but I was busy (lazy). I watched some videos to see how others made a tooth.  I was inspired but decided to go my own way. I wanted to work in the round but didn’t want the rounded look for the molar. What I ended up doing was clustering my increases together instead of evenly distributing them as you would typically do when crocheting in the round. I was hoping to get four bumps on the top but what came out was a more square top with no bumps. I still like it better than if I had just crocheted in the round in the usual way (even though it still looks pretty round in the picture :-)). Ultimately, my tooth looks a lot like the other teeth out there but I think my pattern is simpler than what I was looking at. One video I saw was pretty easy but I thought it was too easy. I’m satisfied with what I created.

Never daunted, I put pen to paper and started designing one that I thought would have the bumps I want. I tried it out and so far am super pleased with it. I’m not done with that one (future post) but it looks like the bumps are there. I haven’t finished  it so hopefully the top will keep it’s shape after stuffing is added.

The rounds are worked in a spiral and not slip stitched after each round. I use a stitch marker at the end of each round.

Do not fasten off, ch 8 and attach to the mid point of the other side. Fasten off.

Ch 8, fasten off straight across. Should look like this. You can join in the middle when chaining across by stopping after you’ve chained 4 and making the fifth chain in the middle of the previous chain so it is secure and then finishing off the 8 chs. 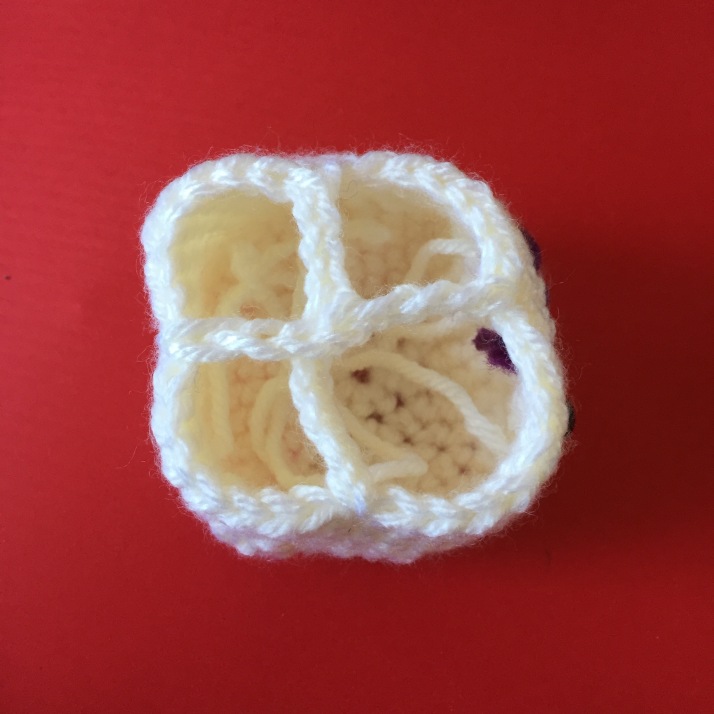 Mine is secured in the middle.

Make your face. I used buttons. 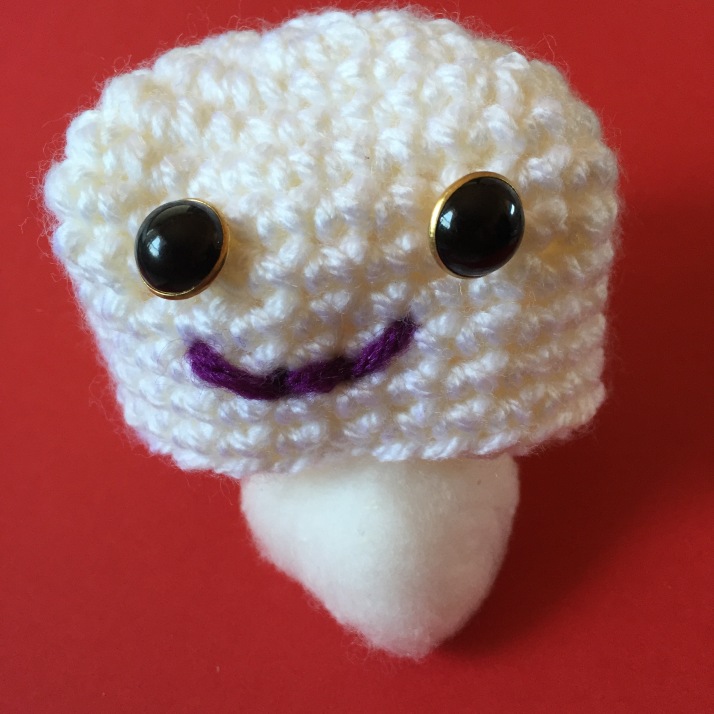 Notes: I found the roots to be a bit fiddly so I took it slow. Each opening will start with 14 single crochet. I counted around each opening first so I knew how I was going to make sure I had 14 stitches. You will attach your yarn at any point and crochet in the round of each opening making sure you have 14 stitches to start. The rounds are worked in a spiral and not slip stitched after each round. I use a stitch marker at the end of each round.

Finish stuffing the root. The opening is small so you might need to use something to push it through the hole. I used the end of a crochet hook.

Fasten off and weave in the end.

Repeat the process with the other three roots. 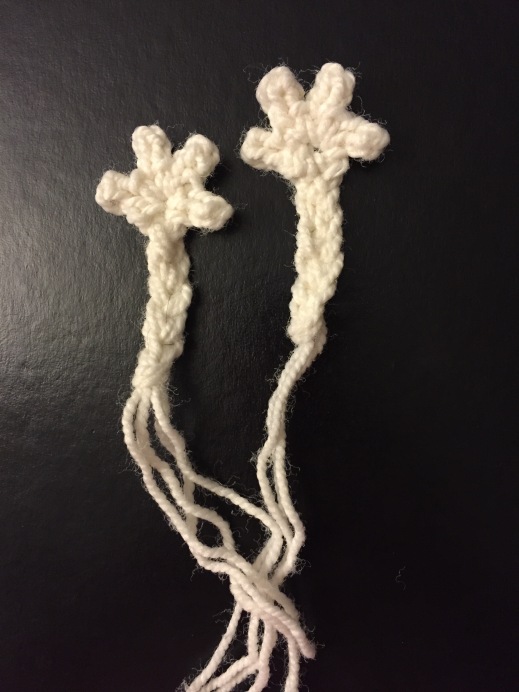 Note: How thick your yarn is or how stiff you want the arms will determine how many strands of yarn you use. I used two strands because I used a different, very stiff yarn than the one I used for my tooth.

*ch 3, ss through second bump from hook, ss through next back bump, ss through last 2 (or 3) strand chain*, repeat 3 more times for a total of 4 fingers. If you’d like a fifth finger, do it one more time.

Fasten off and weave the tail around the hole in the palm to close it up. I used the other tails to sew the arms on to the tooth.

I made a really rough video to show how I made the arms and hands. It’s my first attempt at a tutorial but I think it can help clarify what I did.

I used a popsicle stick for the inside.

I wrapped the fabric around the the popsicle stick and seemed it down the middle of the back of the stick. I sewed the bottom and the top closed as well. The back of the toothbrush should be one solid color with a seam running down the middle. The front should have the white yarn at the top.

I used a thick yarn to add bristles to the toothbrush. I’m still working on a better way to make the bristles but this will do for now.