My second attempt at a crochet tooth is more in line with the vision I had for the project. I shall call him Bumpy.

First off, I made sure I had plenty of yarn to finish him. Plenty of yarn! Bumpy was done in a similar way as Prototype but I added an extra stitch to my increases and had some strategic decreases. So instead of two single crochets in one stitch, I had three. To keep the pattern as I did with Prototype, I had to decrease some stitches in the next rounds. This had the added bonus of making the fabric pucker in just the right way. It was looking pretty good. I was falling in love with Bumpy. I added the face, made the chains that divide the head (for making the roots), added some stuffing and then started on the roots. I was still in love with Bumpy.

I had to rework the roots a few times until I was satisfied with the look. I wrote down what I did (or thought I did) and made the other three roots. Ugh! they came out a wee bit longer! I guess I didn’t keep track of all the ripping back as well as I thought I did. As with all relationships, my love settled down a bit. The  passion wasn’t gone, it was just calming down.

I stuffed Bumpy a little differently than I did Prototype. On that one, I stuffed each root as I went. That got a bit tricky, so on Bumpy, I left all the roots unstuffed. I worked the last round of each root but didn’t fasten off. I placed a stitch marker in the loops to keep them from coming undone. I stuffed all four roots and THEN fastened off and wove the tops closed. It was a better solution. When he was all stuffed up, my love for Bumpy was waning. He looked more like an octopus than a tooth. He still had a beautiful smile but those chunky legs…My hubby said he looked like a tooth, but yes, the legs were a bit big. And yes, one was slightly slimmer and shorter. Hmmm… But he assured me it was hardly noticeable.

I kept staring at Bumpy trying to understand where the relationship went wrong. I started thinking maybe I was better off with Prototype. Maybe he was the right one for me. I brought him out and put them side by side. Hubby was quizzical. “You like the little guy better? No way, big guy is better,” he said. He was right. Bumpy WAS better. I guess I’m just too critical. Looking for problems when there just aren’t any (except, of course, for Bumpy’s slightly shorter and thinner root that makes him lean a little :-)).

Next, I  made a new toothbrush version. I didn’t bother putting a popsicle stick in it. That was not wise. So I made a newer version. I made two panels, sandwiched the stick between them and  and sewed around until the stick was enclosed. The bristles were just chains going back and forth.

Next came the arms and hands. I liked these. I made five fingers instead of four. 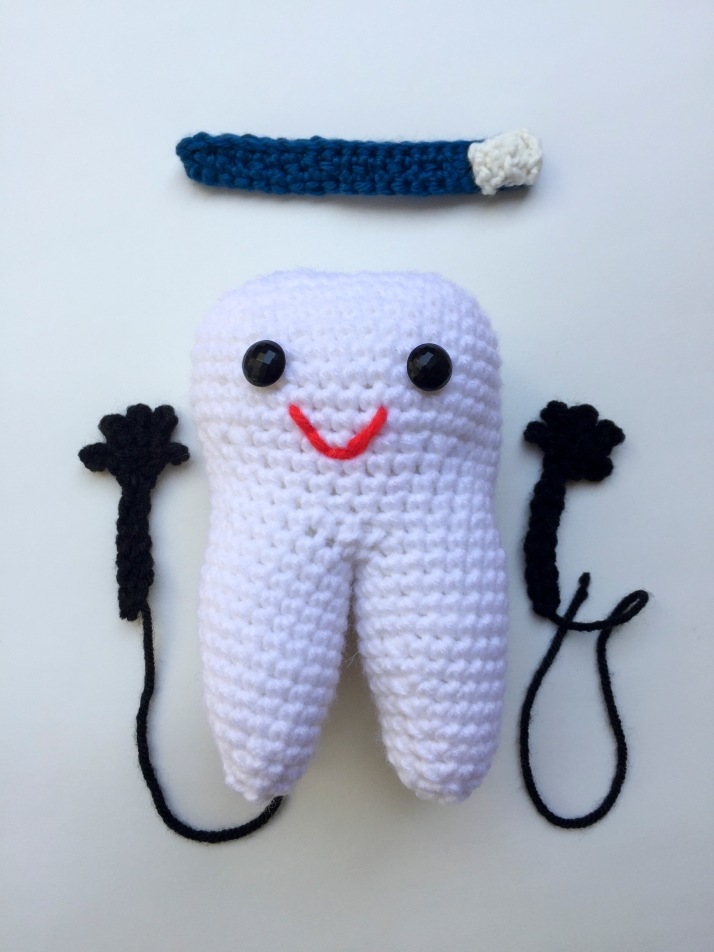 Now I just need to decide which one to give as the gift for my son’s dentist. Which one do you like best?

This is the pattern of what I actually did and not what I was supposed to do. I made a mistake along the way but I liked the outcome so I kept it in the pattern. In round 14  of the top part, I accidentally made an extra decrease. It was supposed to be 3 decreases and 6 regular single crochets throughout the round. I kept it because it looked good to me so I just adjusted the rest of what I was doing. For the roots, the pattern is for the the three roots that came out the same.

The rounds are worked in a spiral and not slip stitched after each round. I use a stitch marker at the end of each round.

Do not fasten off, make the face.

Ch 12 and attach to the mid point of the other side. Fasten off.

Find the center of the other side and attach yarn with a slip stitch.

Ch 12, fasten off straight across. Should look like this. You can join in the middle when chaining across by stopping after you’ve chained 6 and making the fifth chain in the middle of the previous chain so it is secure and then finishing off the 12 chains.

Notes: I found the roots to be a bit fiddly so I took it slow. Each opening will start with 20 single crochet. I counted around each opening first so I knew how I was going to make sure I had 20 stitches. You will attach your yarn at any point and crochet in the round of each opening making sure you have 20 stitches to start. The rounds are worked in a spiral and not slip stitched after each round. I use a stitch marker at the end of each round.

Do not fasten off. Drop your loop and place stitch marker in loop.

Repeat for the three other roots

Remove the stitch marker of one of the roots and pick up your loop. Slip stitch in the second single crochet from the hook and weave in the end closing the circle.

Repeat the process with the other three roots.

*ch 3, ss through second bump from hook, ss through next back bump, ss through last 2 strand chain*, repeat 4 more times for a total of 5 fingers.

Fasten off and weave the tail around the hole in the palm to close it up. I used the other tails to sew the arms onto the tooth.

Make a ch the length of the popsicle stick

Row 2: sc in each st across

Place your popsicle stick between the 2 panels and sew around the edges. Add your bristles.

Attach the tooth to the arms.