Squeee! I finally got to attend the Koroneburg Renaissance Festival that happens in my hometown. A few years ago, I wrote about discovering its existence and wanting to go. But then it was canceled, and in spite of signing up for updates, never got one. I forgot about it and continued going to the one in Irwindale.

Then I saw someone post about the near one on Facebook, and I got excited all over again. Not only did it look like it was actually happening, it had already happened for years! What?! How did I miss it and for years? It didn’t seem that long ago that I was researching it. Turns out it was 2016. Oh well, I know about it now. We went and I loved it.

Both fairs are super fun and hopefully I’ll continue to visit both. The most obvious difference is that the Corona fair happens on its own site and has permanent structures. I really enjoyed the look and feel of the place.

The Corona fair is smaller than the one in Irwindale with fewer and smaller shops. I didn’t find this to be a negative at all since there was still plenty to see. Also, because of this, interacting with with the shop owners is more personal and cozy. I did miss the many food options at the bigger fair but there was plenty to eat so I wasn’t too worried about it.

Being smaller, there were less shows as well but again, I didn’t mind to much because the shows I did see were plenty fun. Also missing were the huge crowds found at the Irwindale faire. This was a mixed bag for me because I hate the crowds, but with more people, you see more and varied costumes, and seeing others amazing costumes is part of the fun.

My verdict? They are both great but if I had to choose one over the other (and let’s hope that never happens!), I’d probably go with the Koroneburg Festival simply because it’s closer (to me), less expensive (parking and admission fee), and I had the same enjoyment out of it as the bigger one. My hubby pointed out that if I’m being honest (who wants honesty), I liked it because my outfit got more attention at the smaller venue because I stood out more in the smaller crowd. Makes me sound so vain, but I couldn’t deny it. It felt really nice that so many people responded to my outfit. 🙂

That’s it for my very biased but honest opinion.

I dressed up in my crochet purple-fairy doll outfit again. People responded really well to it. I ran into so many crochet enthusiasts who could really appreciate the time and effort that went into the outfit. There’s nothing like talking shop with other crafters, although hubby was probably bored to death whenever I stopped to talk to someone about crochet. However, he’s the one who took most of the pictures so I’m very grateful for that.

Fresh through the gate.

We thought the structure looked cool. 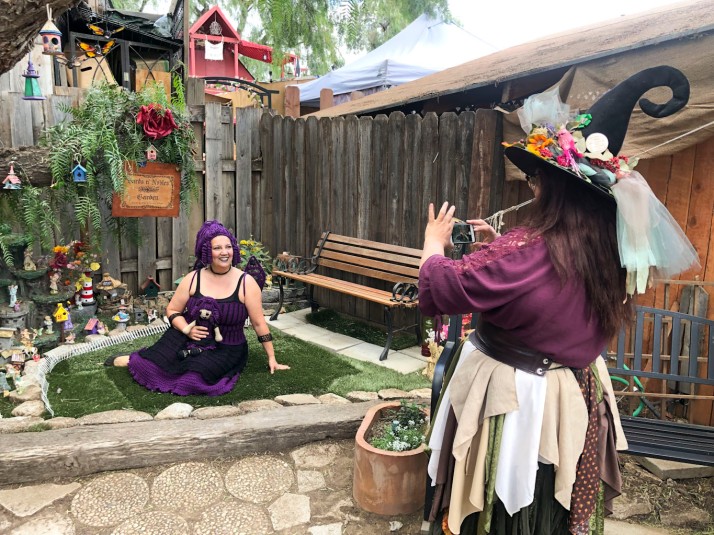 The shop had a fairy garden. They liked my crochet fairy outfit and asked if I would take a pic in the garden. OMGosh! The garden was so cute! 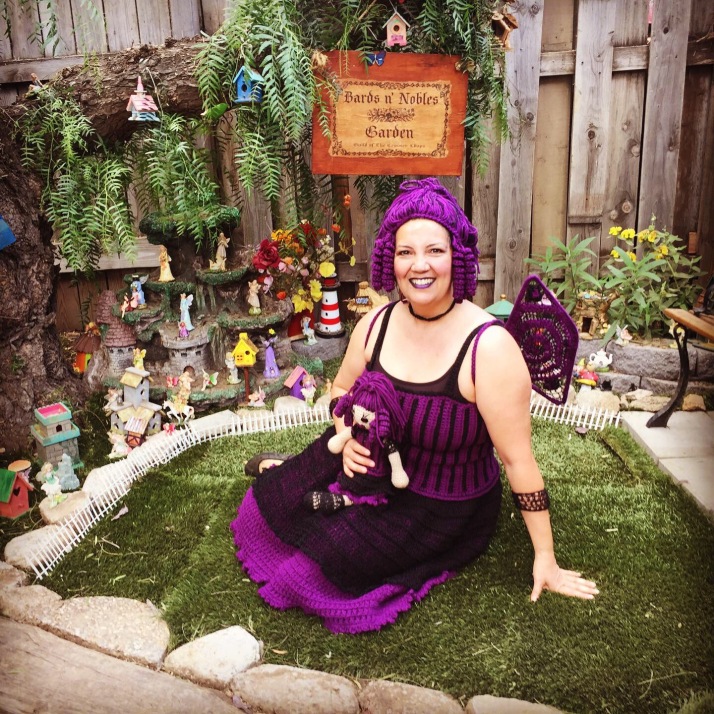 I wanted to take some of the displays home with me!

Hubby wanted to throw something. 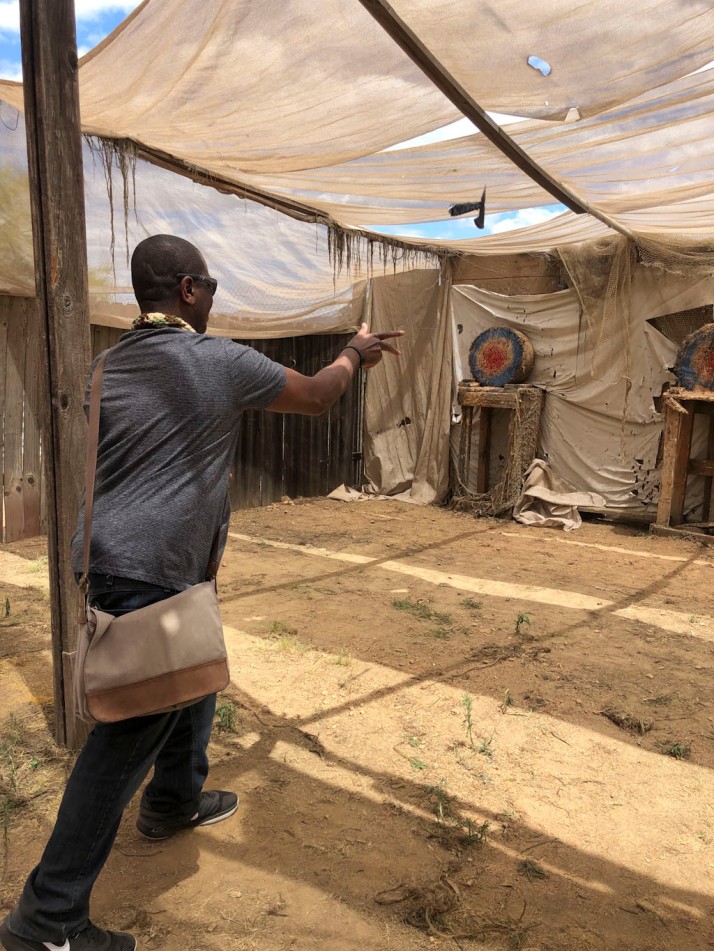 He was pretty good! See the ax in the air?

They were building a new church and this guy was outside.

Sadly this was the only picture we took together 😦

This is what the inside looks like so far.

We saw the Washing Well Wenches. Love them! 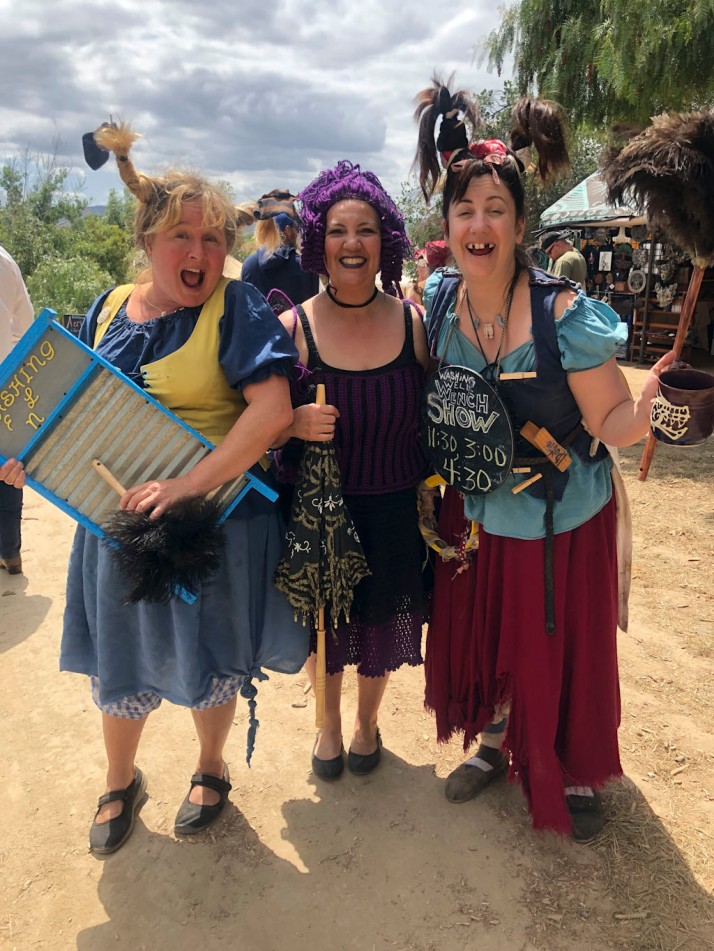 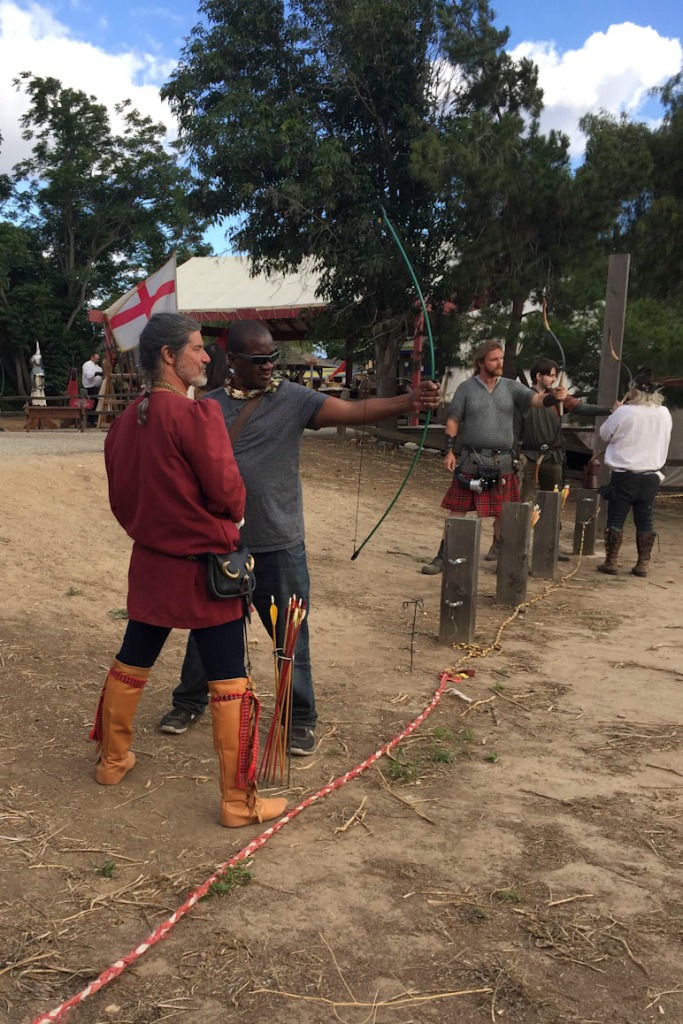 Hubby wanted to shoot something too!

These ladies liked my out and invited me to come back for the fashion show. Can’t remember what they were telling me but looks like it was funny. 🙂

The aerial dancer was great! And look at our beauteous Corona sky!

My muscles don’t look like hers but I’m working on it!

Some really cool pics from the fair. 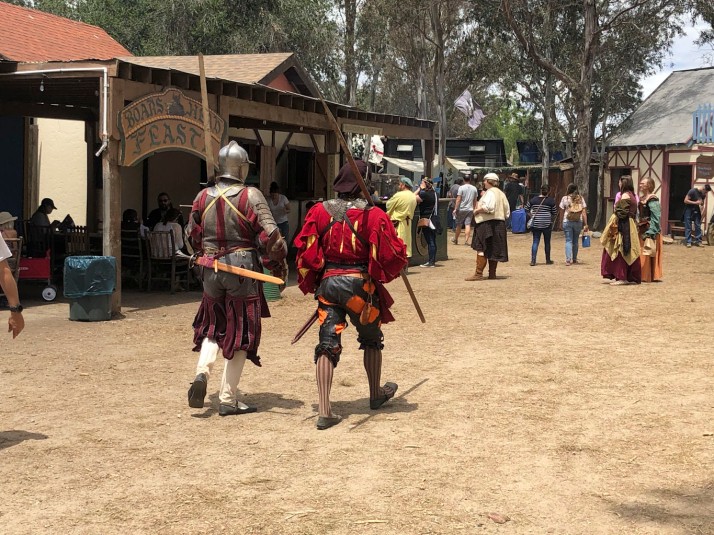 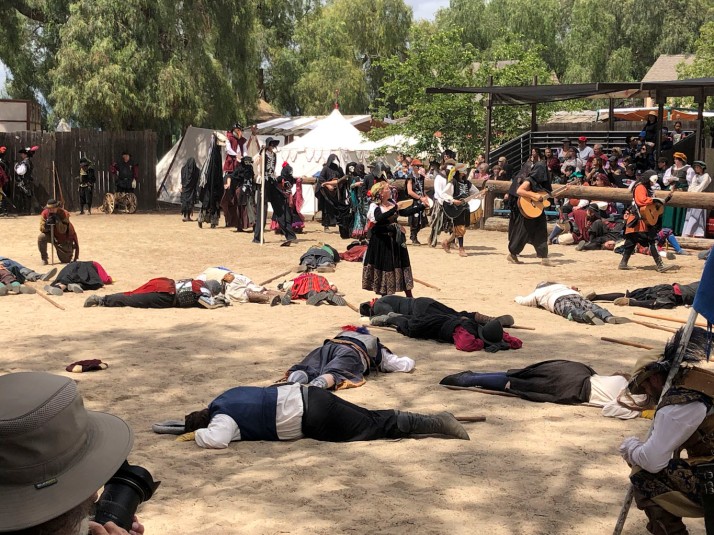 I love this Renaissance Faire!