It’s been awhile since I’ve written about the wonderful crochet projects my students were working on and I thought it was about that time. I meant to get this out before the school year ended but better late than never, right? The kids had  really been inspired and their work deserves to be seen.

One 4th grade girl made a cute book cover. She asked me to teach her fancier stitches. I taught her how to do alternating single and double crochets and then alternating them in the next row. The book cover came out very cute.

After that, she felt ready to make a doll. She’d already tackled working in the round by making emojis so she was definitely ready. She finished the head and body and started work on the hair. She had definite ideas of how she wanted her doll to look.

I let her know that how the doll looks it’s totally up to her. That’s the fun part of making dolls, they are totally unique to us. 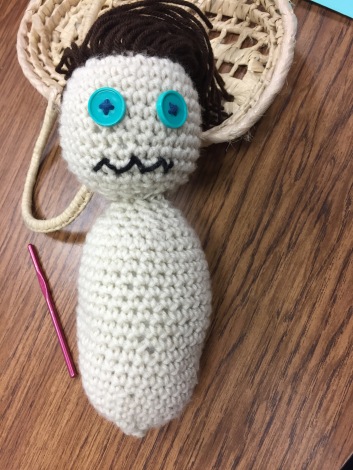 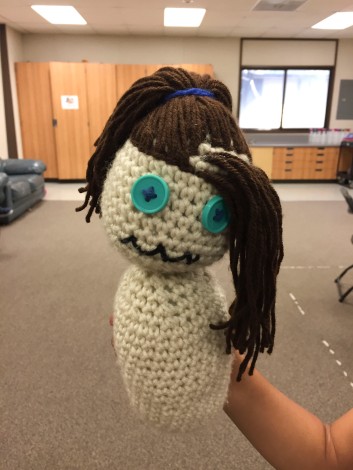 Another 4th grade girl has made several scarves but she wanted a pencil case for her brother. She asked me a few questions and then set out to make it. 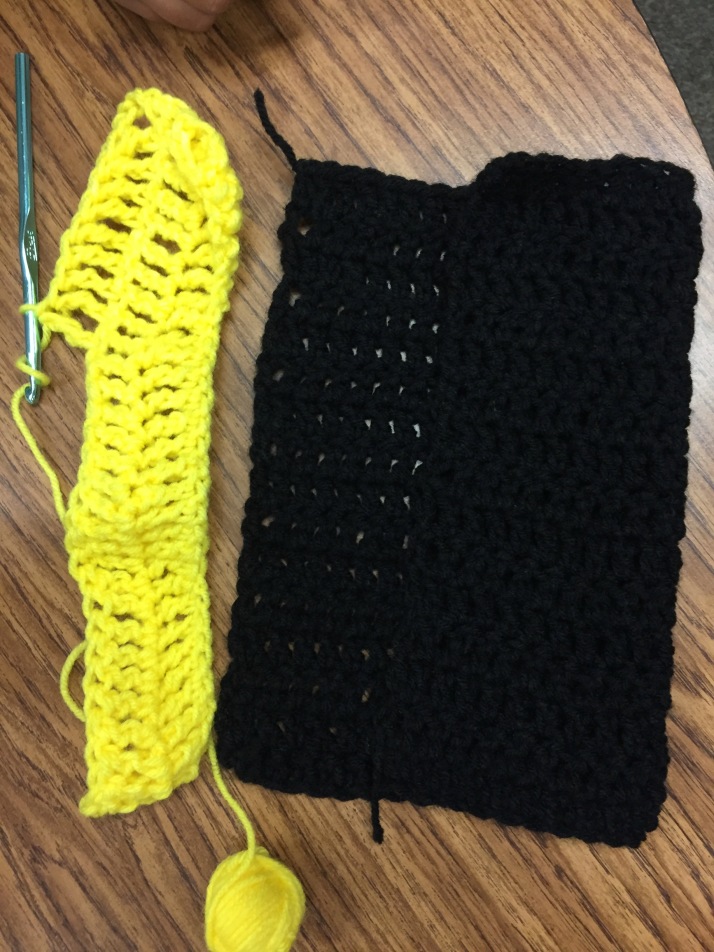 This will be a pencil case.

Now It’s starting to look like a pencil case! She was adding a Batman symbol to the yellow part before we left for the summer. She even sewed it together to form pencil pockets. I didn’t teach her that!

A fifth-grade girl wanted to try a doll as well. I taught her how to crochet in the round and I don’t doubt she’ll have her own doll pretty soon. She managed to finish the head before we left and hopefully she won’t abandon it now that she won’t be returning (5th graders move on to middle school).

Lastly, I’d like to feature one of my transitional Kinders who has mastered the chain in her own way and is itching to move on to the single crochet.

She wants to make so many things and is frustrated that she can’t yet. So far, I haven’t managed to teach a Kinder how to do single crochet. Mainly because they are happy learning how to chain stitch and get impatient that they can’t pick up single crochet quickly. The youngest I have been able to teach that far is second-grade. Even then, that second-grader didn’t master single crochet until she was in third grade. However, this child is so determined, I think she can actually do it. If not this year, I’m pretty sure she’ll be able to do it next year. Transitional Kinders get two years of Kinder. So next year, she will still be a Kindergartner. We will both feel a sense of accomplishment if she manages to learn the stitch. She’s really sharp so I have no doubt she’ll get it.

I am soooooo proud of them all! Watching them make their projects was a revelation to me about how good they’d gotten. I’m constantly harping on about how you can make anything once you learn the basics. If you can dream it, you can make it happen, and they did! I was actually giddy when I saw how little they needed me for these projects. Sure, I guided them, but the ideas and implementation was all their own. So proud. I’m notorious for telling the kids that if they want to learn something, they need to keep trying, even when it seems super hard. It will get easier.

I’m not a knitter. I wanted to learn, though. I tried, got frustrated, tried again, failed again, and vowed to become the best crocheter ever! Nope, I didn’t follow my own advice. I gave up. The irony wasn’t lost on me. I guess I didn’t want to learn that strongly or I would have followed my own advice. But a good thing came of my failed attempt and that was a deeper love of crochet and a desire to keep honing that craft. Thanks failed knitting attempt!

Then I stumbled upon this video tutorial on how to finger knit. Finally, knitting I can do! It’s also something I can teach the kids. This is the kind of project I think they can all do. I might save it for the next school year but I definitely want to introduce it to them.

In the meantime, I did introduce it to one of my Kinder girls and she got so excited because she learned how to do it all by herself. When it was time to go home, she didn’t want to put it down. I didn’t have the heart to force her to stop so I let her take the ball of yarn home so she could keep working on it.  She wanted to make a scarf. I can’t wait to see it and share in a future post highlighting student work.

But just because I think it would be great for kids doesn’t mean it wouldn’t also be great for adults. Have a go at it and see what you think.

Photo and video courtesy of the web.