Awhile ago, my niece asked me if I could make a small doily for a dreamcatcher she wanted to make. Doilies are NOT my thing but I thought I had some my mom made and was going to give her one of those. My intention was to find it right away but time got away from me and I never got around to it. She asked again and I forgot again. Recently, she asked again (I’m a bad auntie) so I actually looked this time but couldn’t find the ones I was thinking of so I decided to go ahead and make one for her.

She requested something simple but as usual, I went on a Pinterest binge and started looking up all the doilies under the sun. Then I found out she needed a tiny doily so that set me off on a different quest because size changed everything! The type of yarn I needed, the pattern for something small like that, etc.

I found this (below) before I knew it needed to be small but I just followed the pattern until I got the size she needed. The pattern can be found here. 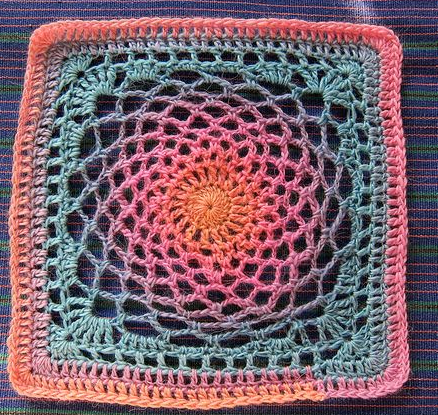 Here’s how far I got for the palm sized doily she wanted (below). 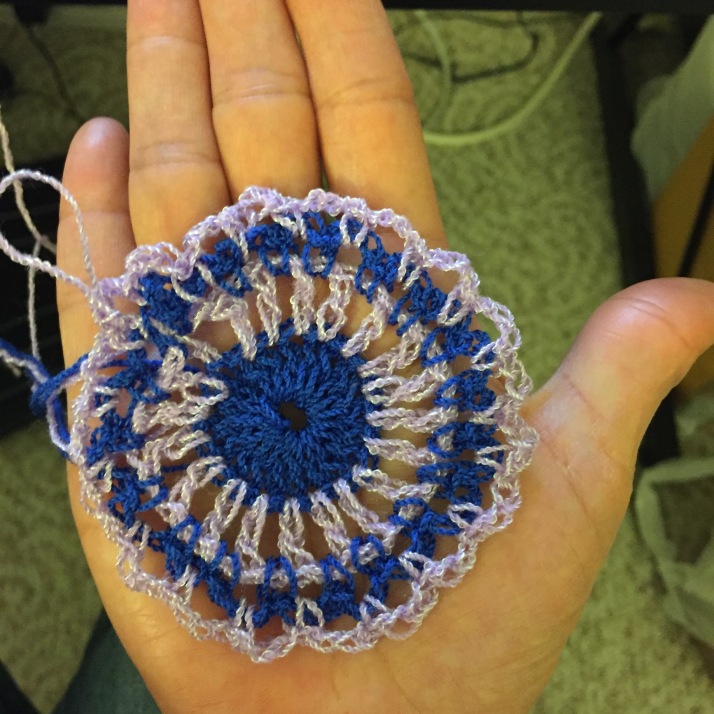 My niece liked it so I had to make her another one that she didn’t ask for in case she didn’t like the first one. Did I mention she already liked the photo of the first one? I whipped up a second one that I made up, just to give her choices. 🙂 Sadly, I didn’t take pictures of that one but it was cute.

And then, she asked if I could make her a scarf with some yarn she bought. I love making scarves. I don’t wear scarves that often so I don’t get the chance to create them for myself so I agreed. And you can guess what happened. Pinterest! I searched thousands of pictures (yes! thousands!) and then found out it was chunky yarn. Well, that lead me on a different search for scarves made with chunky yarn. When I finally got ahold of the yarn, I tried different pattens on it but I didn’t like how they were coming out. I changed gears and went for something more simple. In my slippers post, I mentioned that I made some flowers from a pattern that I saw on the Knit and Crochet Show on PBS. The flowers were for a headband that I didn’t care to make at the time but I liked the stitch pattern so I adapted it for my niece’s scarf and it worked out. I used the left over yarn to make those same flowers.

I did the scarf from memory from the stitch I saw on the show. Here is the link to the headband pattern (you need to register to download it but I like this site and would recommend it).

Even though I was going from memory, I coincidentally used the exact same stitch count as the headband pattern but because I used a very chunky yarn, it came out much larger  🙂 and I obviously did many more rows than they did. Do as many rows as you need to get the desired length.

I did something slightly different on the ends of my scarf that are not in the original pattern. I started the scarf with a row of double crochet followed by a row of single crochet and then I followed the pattern. When I reached the length I liked, I did a row of single crochet followed by a row double crochet to finish it off. I also changed colors. I had less of the pink colored yarn than the white so I did four rows of pink and six rows of cream and repeated that until the end. My niece was pretty happy with the end result.

You might be wondering if I stopped at one scarf and it probably won’t surprise you to know that I did NOT stop at one scarf. I made another because I was on a roll. Recall I looked at THOUSANDS (this might be a slight exaggeration) of pictures so I had a lot of ideas rattling in my head but that’s a blog post for another day!

After our school shut down due to the coronavirus and we had to close down our after-school program, I brought home the large doll I crocheted for the kids. I didn’t want to leave her there all alone. My hubby always complains that when she’s in the house, she scares him when he least expects […]

Another Day in the Life of Sheltering at Home

Yesterday, I had nothing to do on my crochet book. It’s currently at the editor’s and will be back in a week. In the meantime, I spent a few hours researching how to submit a book to Amazon. Turns out, it wasn’t such an easy task. One article (that was very useful) suggested NOT to […]

It’s been brought to my attention by a great horde of people (two to be exact), that although I titled my last post Finished My Book Amidst Pandemic, I actually didn’t talk much about my book…at all. It was suggested gently (not so gently) that I actually talk about, you know, the book! The book: […]