I have been furiously working on the dolls my students have requested. Although my goal was to only crochet those projects at work since they’re for the students, I promised two students I would finish their projects over our Thanksgiving holiday (we get a week off from school for Thanksgiving. Yay!).

One of the reasons I don’t usually take personal requests from students is because as fast as I am at crochet, I can’t possibly keep up with the demand, even if I worked on their projects at home. But, working at my own pace, I can take suggestions and slowly fill the treasure box with them.

However, I found myself letting those suggestions turn into requests because I thought I would have enough time to finish projects when they reached the treasure box. Well…the best laid plans an all that. I now have about seven pending requests and they are all reaching their goals on our star chart so I find myself telling them they have to wait for their particular item. I thought I had a lot of time on one of the requests since he was far from his prize on our chart so I kept putting that one off but my student reached his goal on our star chart and he’d been asking me about it repeatedly. I felt bad that he was one of the firsts to ask me for something and I still hadn’t even started it. So I finished it over the break.

Then, I promptly started the second one I needed to work on. He didn’t get finished until the end of our first week back to school. It was a busy week at work so I didn’t get much time to crochet. My student asked me every single day if I was finished with his Villager (Minecraft character) and I was finally able to tell him yes.

Here are some of the finished projects.

Bottom left and right: Popular MMO’s. I believe his name is Pete. 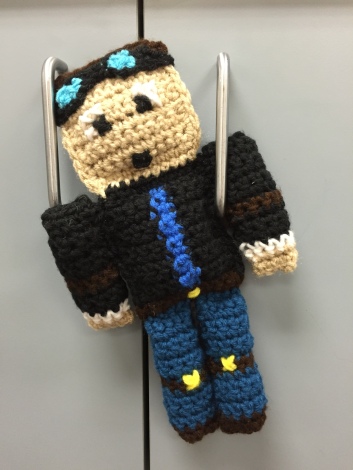 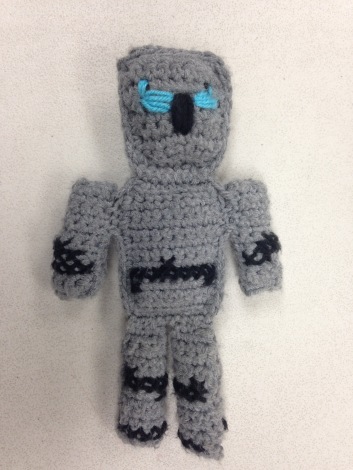 The bottom two look the same but I tried different faces and color work versus cross stitch. The one on the right looks a little worn because I photographed it after I gave it to the student so it’s a little loved around the edges. 🙂

I don’t know these characters so I do my research before I can start one. I go to the actual game on our classroom iPad as well as on the web to get the essence of what they look like. I rip back a lot when I’m making a new character as it never comes out exactly right the first time. I feel I’ve learned a lot as I make each subsequent one. The Villager and the Dan look better than the grey ones. Another student wants one of the grey ones so I think it will come out really well now.

On to the rest of the list! Hello Kitty here I come!