Have you ever received a gift that you absolutely wanted but were horrified when you actually received it? No? Well, I’m guilty of it. My sis-in-law (and friend since we were 15 years old) had this little bonsai tree in her backyard. Every time I would visit, I would say I was going to steal it…every time. I didn’t mean it of course. I wouldn’t steal it, but I did want it in theory, but not for realsies.

Imagine my horror when she came for a visit and walked into my home with that very plant! A gift for me because she knew how much I loved it. Instead of being properly delighted that she brought me such a generous and thoughtful gift, I looked like a deer caught in the headlights. In a split second, I had thoughts of how I might kill this beloved plant. Did she actually bring it here where it might not make it? She’s known me forever, she knows my history with plants! But after the panic passed, I asked what any sane person would ask…would she be alright if the plant died on me? Luckily she wasn’t insulted at my freakout and assured me that she wanted me to have it and if it didn’t make it, it didn’t make it. Since she wouldn’t hold it against me if the plant didn’t like my care (and died), I was able to jump with glee that she was giving me her plant.

Let me explain my paranoia. I’ve always maintained I have a black thumb. The last few years, I’ve downgraded (or is it upgraded?) myself to a brown thumb. I’m not very good with most plants. This must come as a shock to folks who see how much my garden has grown. Over the past few years, I’ve managed to grow my garden with succulents, but let me be clear, not ALL succulents. My garden is what I like to lovingly call a no-risk garden.

If I had to put a monetary amount on what I’ve actually spent on my plants, it would come in at about $5. I grudgingly paid a $1 each for five little plants. I thought it over for a long time too! I had to weigh the pros and cons. Pros: It was only five dollars and they were pretty. They were succulents so they would probably be ok in my garden. Cons: They could die even though they were succulents. Not all succulents can tough it out in my garden. This is why I don’t buy plants. After all, we’re talking life and death here! The plants I bought survived, but I can’t say they are actually thriving.

Then how did I end up with any type of garden? I acquired cuttings from a friend and through plant trades that that same friend introduced me to. I took everyones castoffs at those trades. At the end of the trading day, I would walk around and take all the cuttings folks didn’t want to lug back home–cuttings they were just going to toss anyway. This is how I built a guilt free, low stress, virtually impossible to hurt kind of garden.

Every plant you see: Strong!

I didn’t have to worry about knowing a bunch of plant rules beyond plant it, water it on my schedule, and see what takes and what doesn’t. Through trial and error, I ended up with a garden I was proud of and with plants that didn’t mess around. I don’t coddle my plants and I give them minimal care–and they like it! Those that didn’t make it were replaced with those that could. A few neither thrive nor have died, like my paid-for plants, but they just keep holding on. I respect that. They can stay for as long as they can handle it. Then there’s the dog to contend with. She’s not destructive by nature but once she starts chasing the lizards, mayhem ensues.

Succulent casualties happen because of the doggy, but again, the ones that make it just grow right back after being broken, usually right where they dropped. If you knocks over a potted plant in pursuit of said lizards, I might get mad for a second but then I just pick up the beat-up plant as best I can and stick it right back into the pot. Considering how tough my yard is, you’d be surprised at the variety of plants that could withstand this hostile environment, and look good doing it.

And to this environment, my friend brought her little ficus as a gift. 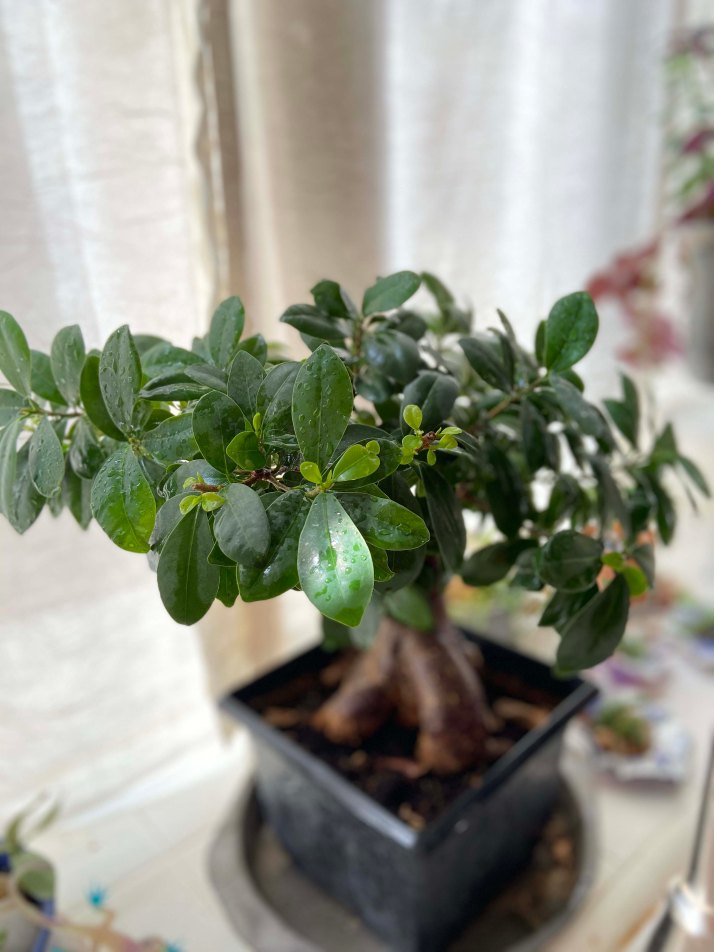 I have to wonder if she got mad at the plant or hated it for some reason. Or perchance, she had so much faith in me because I loved it so, she thought I would actually learn how to keep it alive. I admit that there are two other plants in my home and garden that I took the time to learn something about because I unwittingly became attached to them.

The first is my Plumeria. I love Plumerias and at one of the trades, someone gave me a small potted cutting that had taken root. I was nervous about taking it, but the owner said it was fine. It was just a cutting so they didn’t care about it. The watering needs were the same as the succulents for the most part. You let the soil go dry and then give it a good soaking. There were other things I learned about Plumerias and I did the minimum amount to keep mine alive. It started getting bigger and better leaves every year. So although it fits in nicely with my no stress, guilt-free garden, I care for it and don’t want it to die. I knew this because we had extreme temps for a few days this summer and it got scorched! I tried desperately to save it, whereas normally I would have just tossed it. Luckily, it’s a tough cookie and it perked up, burned leaves and all.

But with some ouchies.

Then my sister gave me a cutting from her yard and that one has gotten really nice even though I minimally followed instructions on propagation. 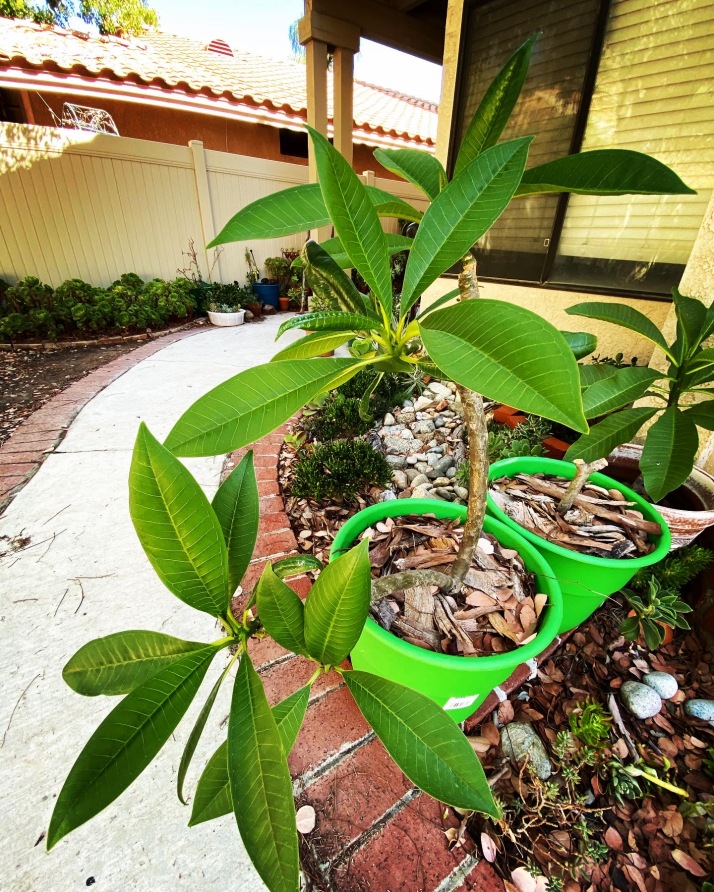 I was amazed at how well this cutting flourished.

As much as I don’t want them to wither, if they do, at least I didn’t spend anything but my time on them. But I really, really want them to give me flowers someday.

The second plant is a houseplant given to me by my mother-in-law. She got it as a gift but she doesn’t like house plants. When I mentioned I thought it was pretty, she asked if I wanted it. I explained my track record with plants and told her it would most likely die. She gave it to me happily saying it would most definitely die with her because she didn’t want it. It was a rescue so I felt no guilt in taking it. That was years ago and the plant is still very beautiful.

It makes me happy every time I see its pink leaves.

I moved it to my bedroom and it started to wither away and I quickly moved it back to the kitchen. It got better but it was still losing leaves. I jumped on the internet to learn about how to care for it properly, hoping to save it.

It need to be repotted.

So a plant that initially started as a no stress plant turned into a plant I love, thereby forcing me to learn how to keep it happy.

But even so, and though they aren’t succulents, those plants are watered much the same way I water the rest of my garden. But this little bonsai definitely has different watering needs AND I already love it and am attached to it, OH MY! I have done some research on it and am going to do my best to provide a happy home for it. 🙂

15 thoughts on “Gift Of A Bonsai Tree”