Ok, I promised my niece a crochet Baby Yoda. After finishing the first one for hubby, I told her I was making hers. I sent her pictures of the work in progress and she was extremely excited. When the doll was all finished… ummm, hubby wanted it. I had tweaked the original pattern (there was no pattern) of the first doll and this one came out much better. The face, the proportions, everything! Hubby really really wanted it. I know, it was my fault, I shouldn’t have said anything to my niece about that doll being for her. I mean, I live with the man. He really wanted it. After all, I could make her a new one. It could be argued I could make HIM a new one, but I live with the man! We were going to see my niece at Disneyland in a few days and I hatched a plan. I would make her a brand new one in the two days before I saw her.

But there was a problem (isn’t there always?). I couldn’t finish it in time! I was up till 1 am working on it and I managed to finish the body. I was soooo tired and had to get up at 6 in the morning to head to Disneyland. I worked it out that I would crochet in the car (did I mention I get car sick?), crochet in lines, and crochet anytime I was sitting. I also had to convince her to trust that the second (3rd?) doll would be as good, or even better than the one I promised her.

I found a backpack my daughter had given me that would be perfect to store my crochet supplies as well as snacks and my other junk I take to Disneyland. The backpack had handles as well as straps. It was perfect. I packed everything up. 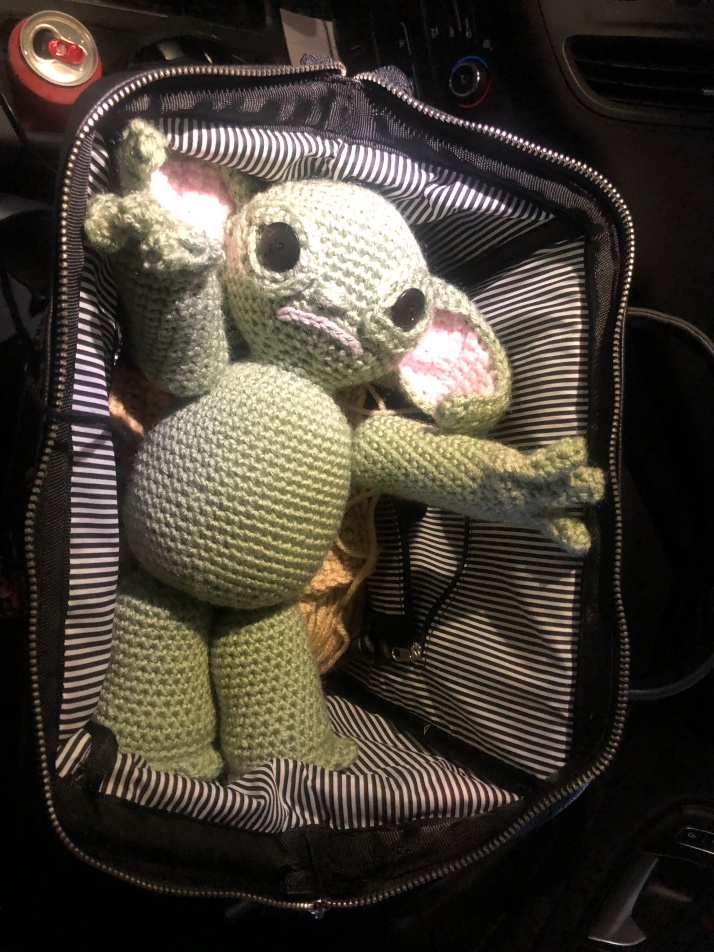 Hubby had his Baby Yoda and he got a lot of attention for his doll (action figure?). 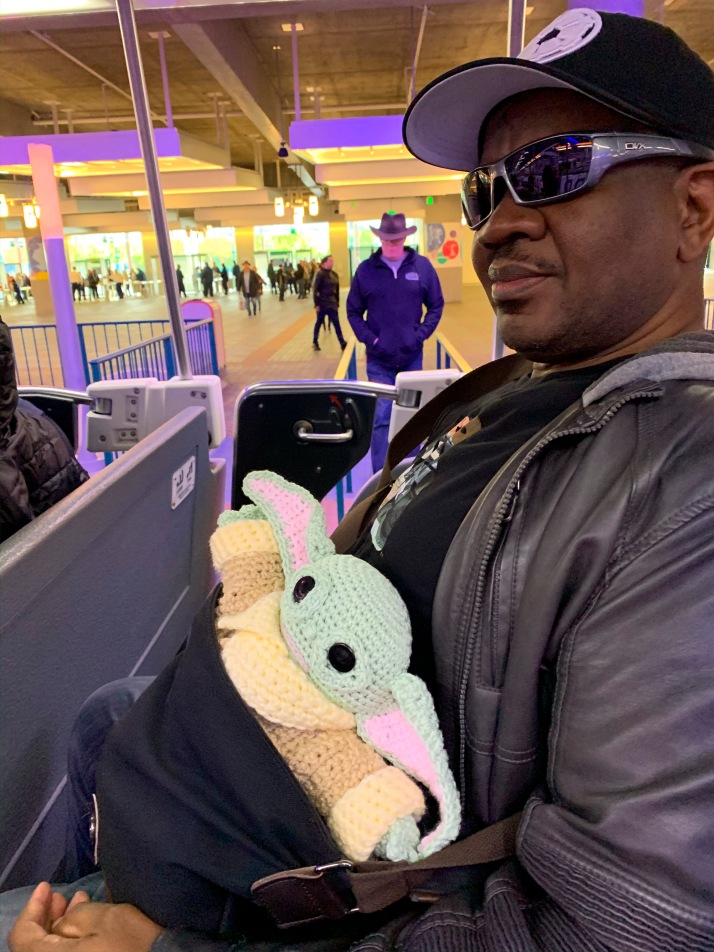 Hubby with Baby Yoda (when hubby was still happy to hold him).

Once at the park, my niece was very skeptical about the new development. She was not amused. She took hubby’s Baby Yoda as a hostage while she decided if she wanted the new one.

I promised I would finish the new one but she could hold the finished one until then (as if I had a choice).

She took care of it as if it was her own.

Turned out to be a good move. The attention she got while holding it was incredible. Hubby would have put it away about 15 minutes in. She handled the attention like a pro and always pointed to me as the creator. She walked proudly with it even though we were literally stopped every few minutes.

I was blissfully crocheting when I got the chance and got my own attention when they knew I created the one she was holding. I was sitting outside of Autopia (a ride I didn’t want to go on) and was crocheting while the finished one was near me and many people stopped to talk to me about it. One young man came up to me and just said, “Are you selling those?” I said no, and he said, “I would have bought one if you were.” And he walked away unceremoniously. It was hilarious. 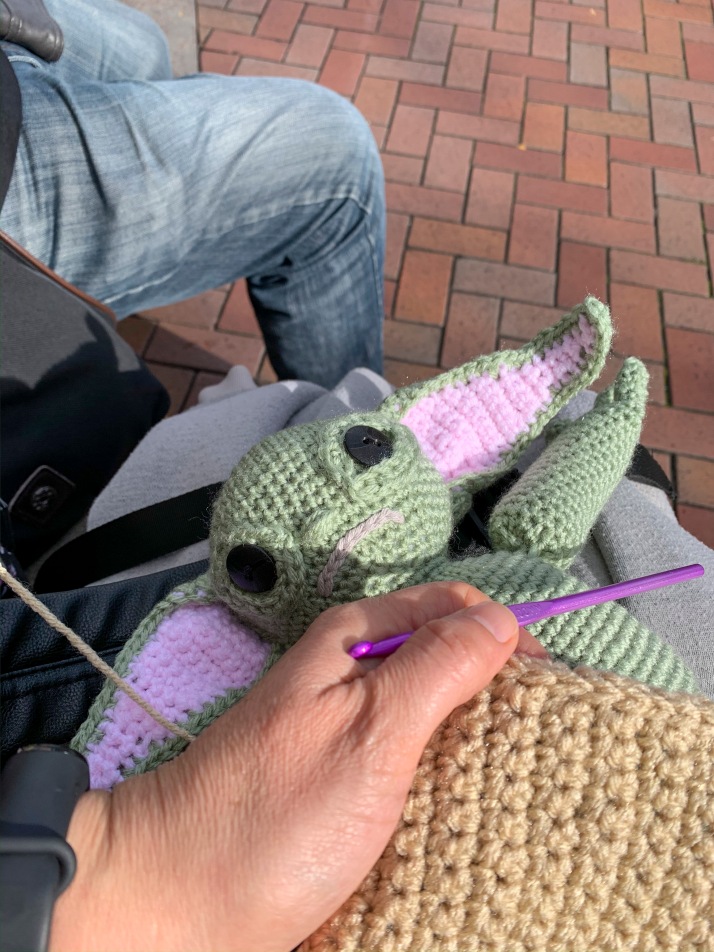 In front of Disneyland City Hall

In line for Space Mountain. The backpack was fantastic!

When I did finally finish the one I was working on, my niece decided on that one. Her boyfriend said it was better because it was born at Disneyland. Her sister (also my niece) said she liked the color better and even hubby admitted the face was just a little more accurate. Plus, this version had three fingers versus the little webs like the other one. After all that endorsement, she took the new one.

Can you see his little fingers?

We even did a little photo shoot.

After that, we both proudly went to Galaxy’s Edge holding our Baby Yodas (hubby didn’t want to hold it at that point) and did another photo shoot with both dolls. Can you tell which is which? 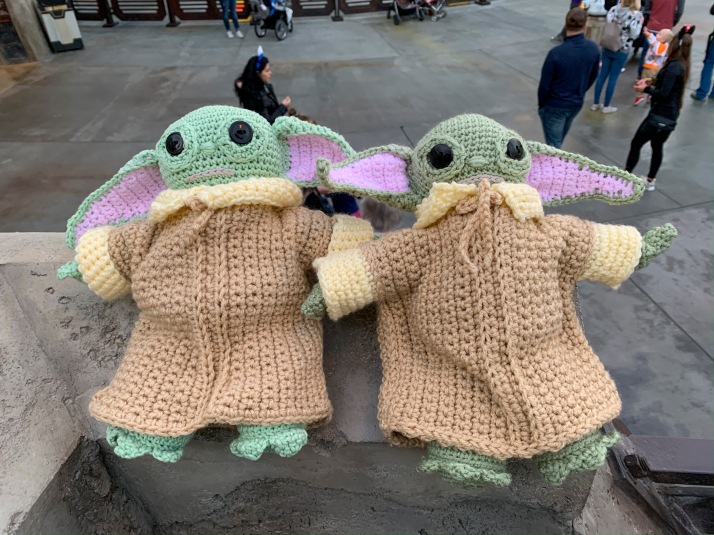 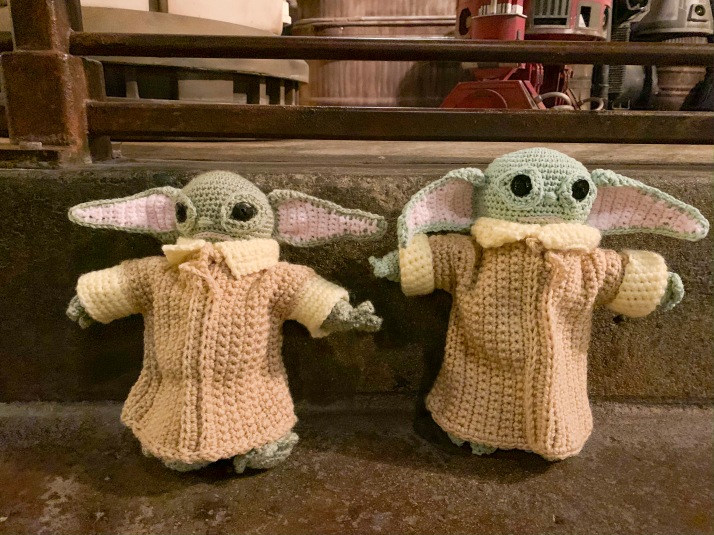 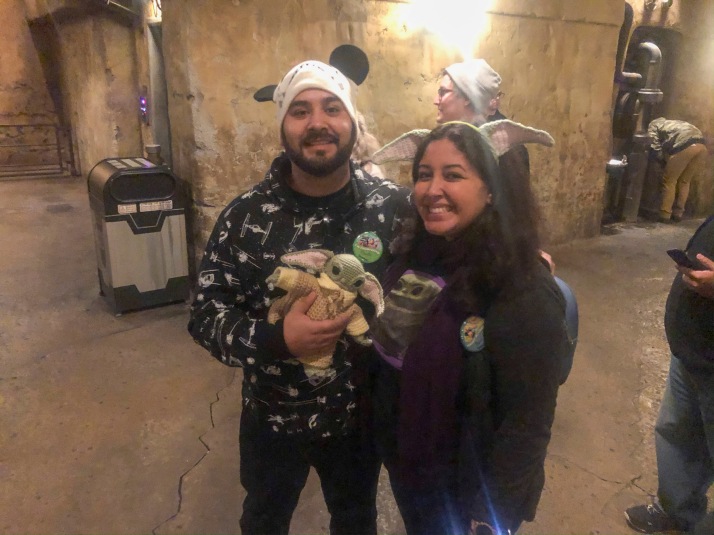 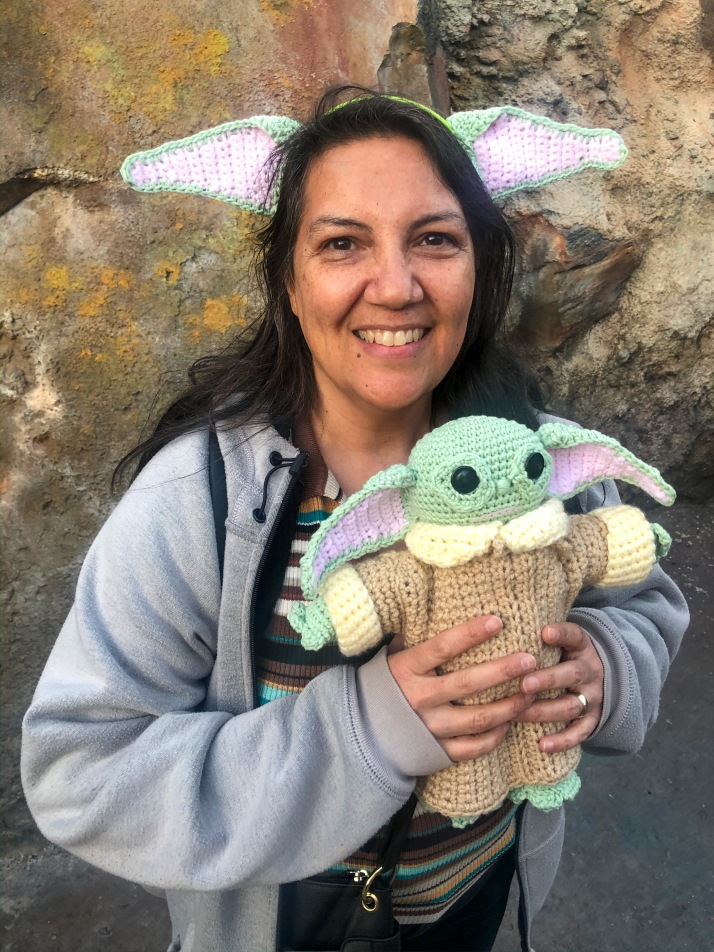 And I finished my ears at Disneyland too!

1) Where did we get them so they could get one

2) Did I  make it and could they have one

3) Was I selling them

or after knowing I made them and wasn’t selling them

4) Let me know how much they liked them

But in spite of all those nice compliments, I must admit to hubris as two ladies walked by and saw the dolls. One commented in passing how cute they were, but not directly to me, and the other one dismissively replied to her that they’re  all over Etsy. I said out loud that I made them as they were walking away. You might ask yourself what possessed me say anything at all. Who cares if they thought we’d bought the dolls on Etsy? Apparently I did. Hubris! It just came out! We laughed about it because my pride had me blurting things to strangers who weren’t even talking to me. I doubt they even heard me (thank goodness).

Another lovely lady did engage me and asked me if I had used a pattern that had been taken down from the internet. Ummm no, I don’t need no stinking pattern (patterns are lovely!). I had enough sense not to have said that. Instead I just replied like a sane person that no, I just made up the toy as I went. We talked about how she makes them too and sells them. It was a lot of fun engaging with people.

It was all a bit surreal. I thought the dolls would get some attention, but not to that extent. I suspect once Disney comes out with their official toys, some of that will die down. But I will enjoy it while it lasts. 🙂