I hope everyone’s New Year is going great. I also want to remind everyone there’s still time to sign up for my first ever Giveaway. I hope you pop on over and enter. 🙂

I’ve had a three week break from work this holiday season which ends next Monday. Yikes! I have gotten a lot of things crossed off my to-do list and feel very accomplished. Surprisingly, crochet was not one of those things. This first week into the new year was supposed to be about crocheting but my focus took a different turn; photography.

It might surprise folks that I actually have a Bachelor’s degree in photography.
I completed my degree way back in 1994, but hey, I still have that degree! I shot professionally for a few years after college. Right out of school, I photographed high school seniors and weddings. Although I have never stopped shooting, I headed more towards education so I could work around my children, eventually earning a Master’s in teaching. I continue to shoot product shots for my hubby (he’s a graphic designer and sometimes needs photos) and am the resident photographer for my family, but I no longer shoot professionally. As a consequence, I pull out my camera less and less. I pull it out for my crochet items but at least half the time it’s more convenient to use my cell phone.

I’ve also noticed over the years that post production of the photos was as important if not more important than the actual photo shoot. This was intimidating to me so I fell further behind. I did learn the basics of photo retouching and manipulation but nowhere near the degree I needed to stay relevant. I took a course in Photoshop at the community college years ago and now I’m still behind. I know the basics but not all the fancy schmancy stuff I want and aught to know.

There is also technical terminology that I should understand that goes straight over my head and I’ve been too intimidated to try to figure it out. There was so much to learn and I wasn’t sure I would understand it anyway and I kept getting further behind.

It was time to change all that. Teaching and crochet have become a huge part of my life and have become a part of my identity but photography is still part of who I am. I didn’t want to let that part of me disappear.

My camera is pretty old and I thought the flash triggering system was broken so I decided that was the place to start. I spent the first days of January researching which would be the best camera to purchase. A positive unintended consequence is that I learned a bunch of technical stuff that had been eluding me. I guess watching hours of YouTube videos will do that! I changed my mind about a hundred times about which camera I wanted, absolutely certain every time.

I changed gears and started researching lenses instead. Turns out that while you’re watching videos about one thing, you learn about other things that you want to check out. There’s always a huge argument about whether it’s better to invest in lenses or camera bodies. I took a break from cameras and I researched lenses for a few days.

Still in throws of indecision about picking a camera, I started playing with my flash unit that I got for Christmas two years ago! I think I pulled it out a year after I got it and it wouldn’t trigger so I put it back. That’s when I thought my camera was the problem but I didn’t investigate further.

It was time to investigate! I pulled it out and looked at more YouTube videos and I figured it out. My camera was not broken and I learned how to use my flash. So back to making a decision about the camera I wanted.

And what did I decide? That it’s the photographer that makes great pictures and not the camera. Yep, I knew that already but I guess I needed a reminder. I’m keeping the camera (it’s old but still takes great pictures) and I ordered a new lens to round out the ones I already had. I bought a new flash unit (they’re so cheap now) and I’m going to practice with my new lighting system. I still have all my umbrellas and stands. Now a days, many professional photographers are using these flash units instead of the big strobes and power boxes (I still have those tucked away somewhere).

I’m going to focus on learning how to be equally good at the software needed in post-production as I am at taking them. That’s going to be the most challenging (and most intimidating) part but I’m going to go for it.

Sidebar: I shot my son’s professional senior pictures myself this past September. I really liked them so I’m not too outdated. 🙂 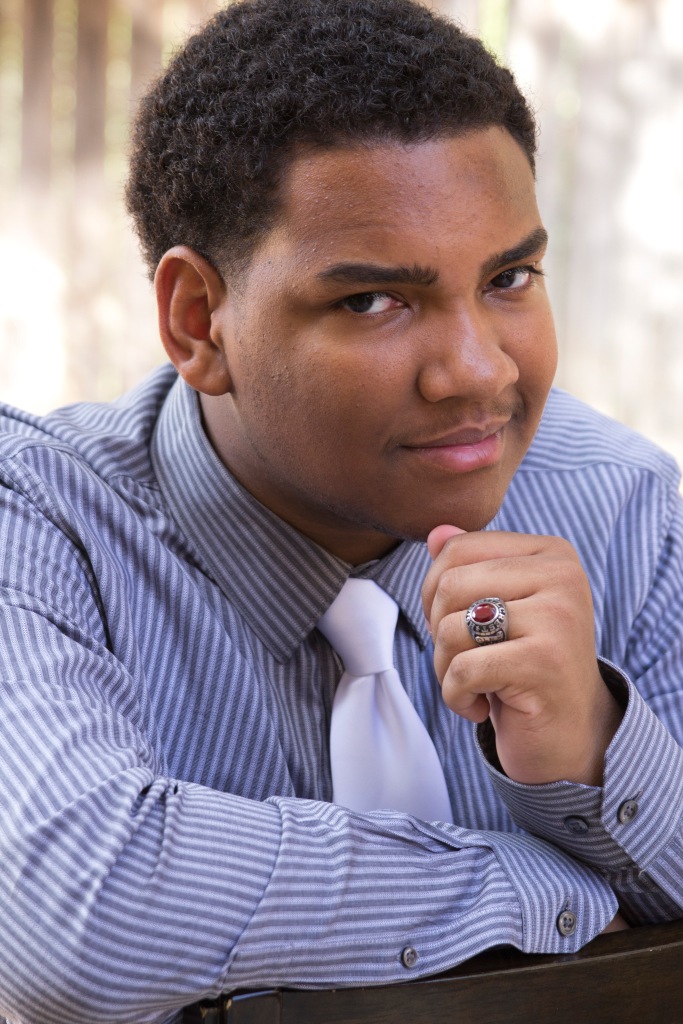 This was his favorite. He said he looked like an evil James Bond. LOL

However, I had to take him in for his senior yearbook picture. I was surprised to see that they were using such a simple setup, way simpler than what we were using back in the day. They were even using DSLR cameras! We used these huge, heavy full frame film cameras on industrial tripods. They weren’t using tripods at all! I didn’t expect to see the huge film cameras but I also didn’t expect to see them hand-holding the kind of camera I already own.

I took this with my iPhone. How times have changed.

Wow! I think that’s when thoughts of updating my skills started bubbling in my head.

My hubby was surprised I had a sudden re-interest in my photography and my obsession with a new camera but was excited to see me so jazzed about starting it up again. I’m mainly wanting to stay relevant in the field and want to take more pictures of my crochet, possibly for stock photography or possibly other creative endeavors. I teach, I crochet, I take pictures and now I write. I already combine all of it but why not truly combine it all and see where it takes me? I want to have all the tools at my disposal as well as the know-how to take advantage of the equipment I already have.

So this first week into the new year has been one of discovery, learning and awakening. So if there’s one resolution I want to make this year is to keep learning and applying what I learn. Here’s to staying relevant and keeping my skills sharp!

7 thoughts on “Start of a New Year and Photography”