I don’t really write about food here (or anywhere) but tonight, I couldn’t resist. My son was laughing hysterically after eating my delicious dinner. Before he ate it, I warned him that it was an experiment, so it might not be so great, but I thought it looked good. My son, being the good son that he is, tried it with an open mind. To my delight and his, he liked it. The more he ate it, the more he said he liked it. Then he said it was definitely a keeper. 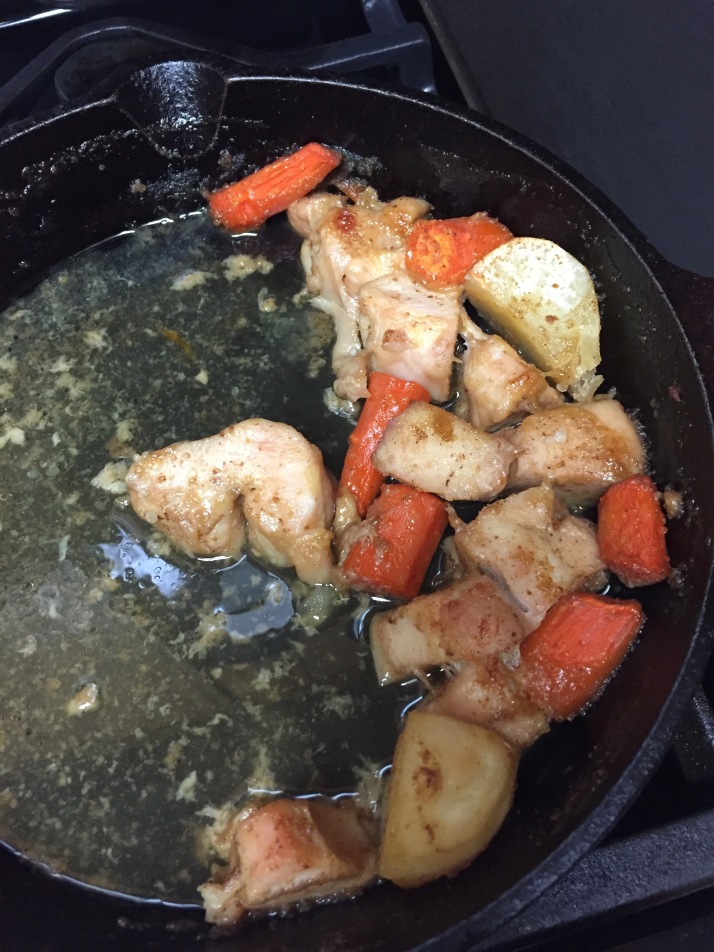 Boy, was I relieved. It took an hour and a half from prep to finished product, so if it hadn’t worked out, I would have scrambling around for something else to make real quick. As we were eating, I told him how I came about this new recipe. I’m not usually very adventurous when it comes to cooking. What I cook, I cook well. I just hate to cook. I love looking at pictures of all the yummy food I see on other blogs, but that hardly ever transfers to my kitchen.

Back to this particular recipe. One of the blogs I follow makes some pretty delicious looking food. What I like about it is that it looks pretty simple too. Right up my alley. I decided to give one of her recipes a go. The list of ingredients was easy enough. Chicken thighs, potatoes, oil, maple syrup (I just so happened to have some from another recipe I never made but meant to), etc.

Before I left for work, I pulled out some chicken breast from the freezer, not thighs. I thought, ‘chicken is chicken after all’. When I got home, I got the maple syrup ready, hoped I had the spicy mustard and pulled out some carrots. The recipe called for garlic powder. I don’t like garlic so I substituted it with Lawry’s season salt and cumin. I was a little nervous right about then, but I kept going. Did I mention the recipe is called Skillet Chicken thighs with spicy mustard and garlic? So far no chicken thighs OR garlic.

I followed the rest of the instructions and everything fit nicely in the skillet. An hour later, dinner was served. While I was explaining to my son where I got the recipe, I also admitted to changing it a little bit. I pulled up the recipe and that’s when he started laughing. He accused me of changing all of it!

Nuh uh! I pointed out that chicken is chicken and that that shouldn’t count as a change. I hadn’t noticed it was supposed to have cherry tomatoes so I gave him that one. I added carrots so he got that one too. The potatoes were supposed to be red-skinned but I just grabbed our russet potatoes. But a potato is a potato so I clung to that one, no change there. I conceded about the spices, namely that there was no garlic. Oh, and I skipped the parsley. I would NOT admit that I changed the oil. I used canola instead of olive oil. Oil is Oil! He didn’t want to give me that one and I refused to call it a change.

He insisted I had completely changed the recipe and created a new dish since 80 percent of it was different. I insisted it was essentially the same. We agree to disagree (I’m the only one agreeing, he still disagrees :-)) We both agree it was delicious and he made sure I wrote down what was different. Hubby came to eat later and loved it too…but he agreed with my son. In the end, it was a successful dinner and I thank ohyestheydid for sharing a great recipe for, at the very least, providing the inspiration for the meal we enjoyed tonight.