The problem was trying to do it the way they had it in the manual. Personally, I like going from the back to the front of the fabric but the instructions had you doing it under the loops or something. I’d seen this before and always just did it my way. So I needed to practice. Luckily, I had a reject square that didn’t come out the right size the first time around.

First, I had to decide on the shape and size my initial would be and then I had to practice it their way. I’m not sure why, but I ended up with a huge ‘Y’. It didn’t say the letter had to be big but I went BIG. I practiced the cross-stitching and placement on that reject square. I undid the cross stitch a few times but I was finally satisfied and was ready to do the cross stitching on my good square. The size was good and the stitches looked good and I had the cross-stitch down and then I noticed it was off-center!

Hmm…the directions didn’t say it had to be centered. I ignored it for a few minutes and then looked at it again. Yep, it was still off-center. I debated with myself about sending it in as is and starting on the next assignment. I guess I lost the debate because I couldn’t live with it. I had to make another square with a centered letter! 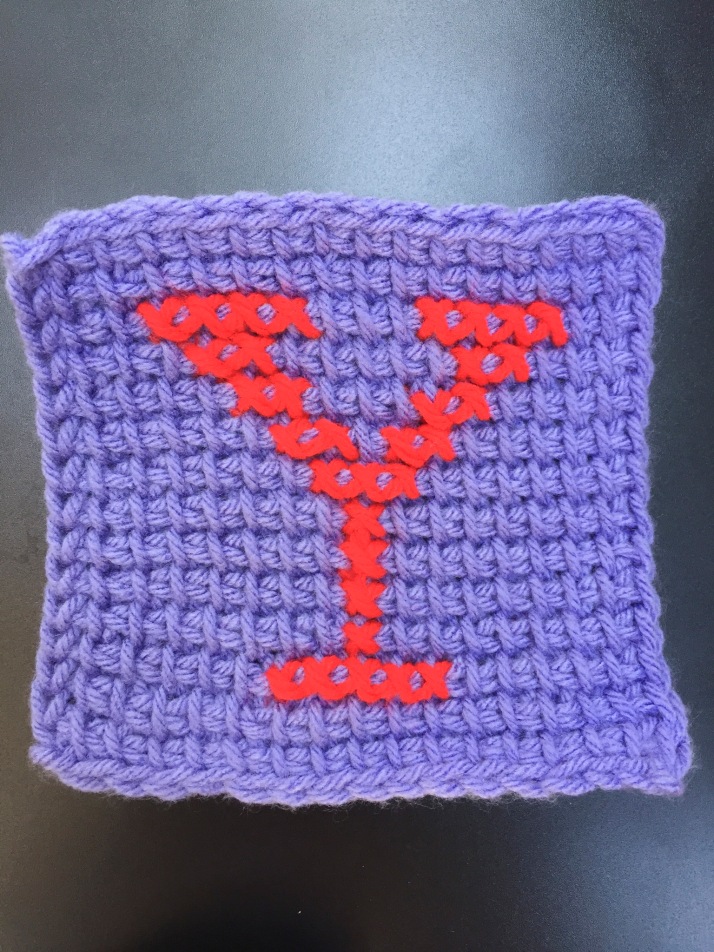 Still needed blocking but it was centered!

I was happy with it and was ready to move on to the next assignment. I should have moved on to the next assignment. Instead, the two abandoned practice squares were staring at me, daring me to turn them into something. Normally, I just toss my rejects into my bottomless pit (bin) of crochet pieces that will someday (never) become something else. But these rejects had my initial on them. I just had to do something with them, now, apparently.

The first one was screaming to become a phone case. I know, I know, I already have a bazillion phone cases buuutttt I didn’t have a yellow one with my initial. I put it over my phone and centered the ‘Y’ just right and I got to work. I had to add more to the sides and borders but I made it work. 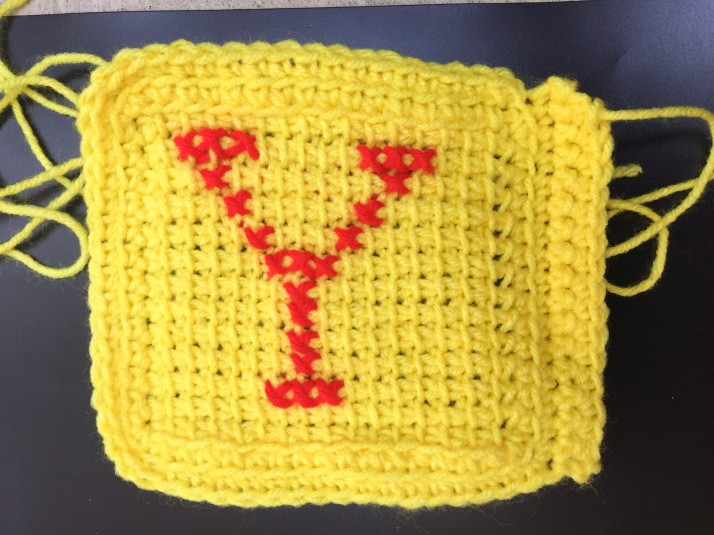 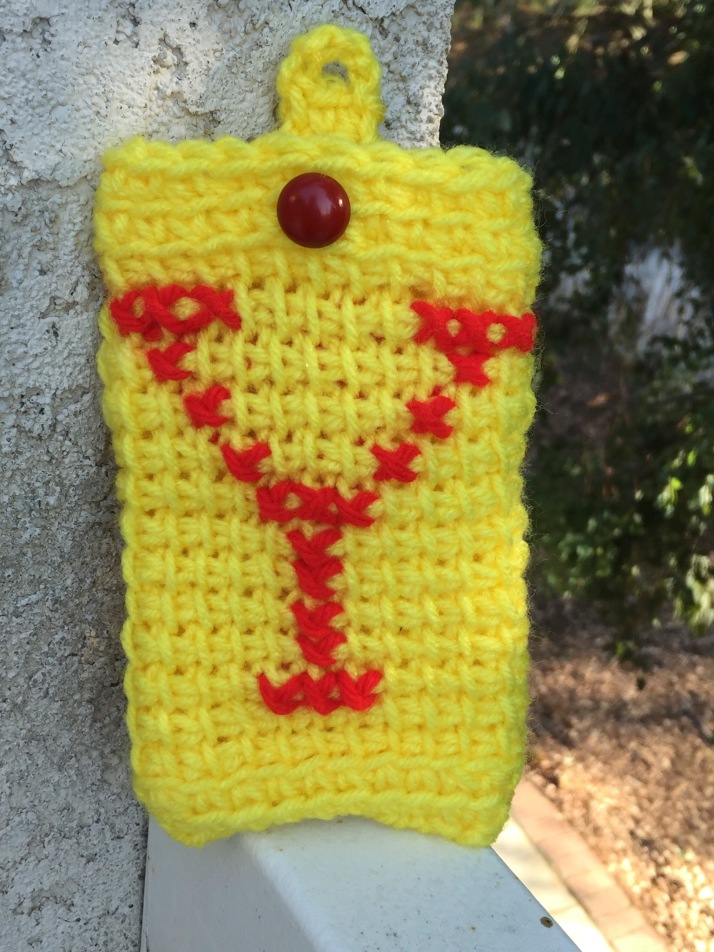 ” I look great as a phone case! No bottomless pit for me!”

The next one didn’t want to become a phone case. It argued it would work well as a small purse. But that would mean I needed another square with my initial for the other side, wasting valuable time. I was supposed to be starting the next assignment! That silly argument didn’t deter me and I made another square and worked furiously on the purse. I could use a purse for my phone when I watered the grass and didn’t have pockets for my phone. Hah! I sneakily made another phone case masquerading as a purse! 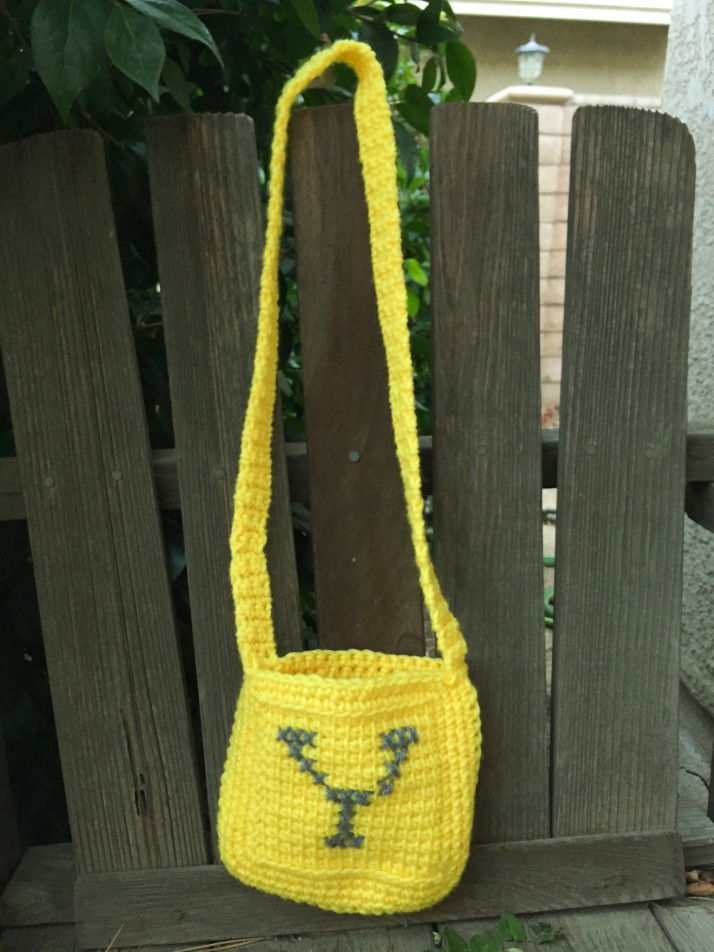 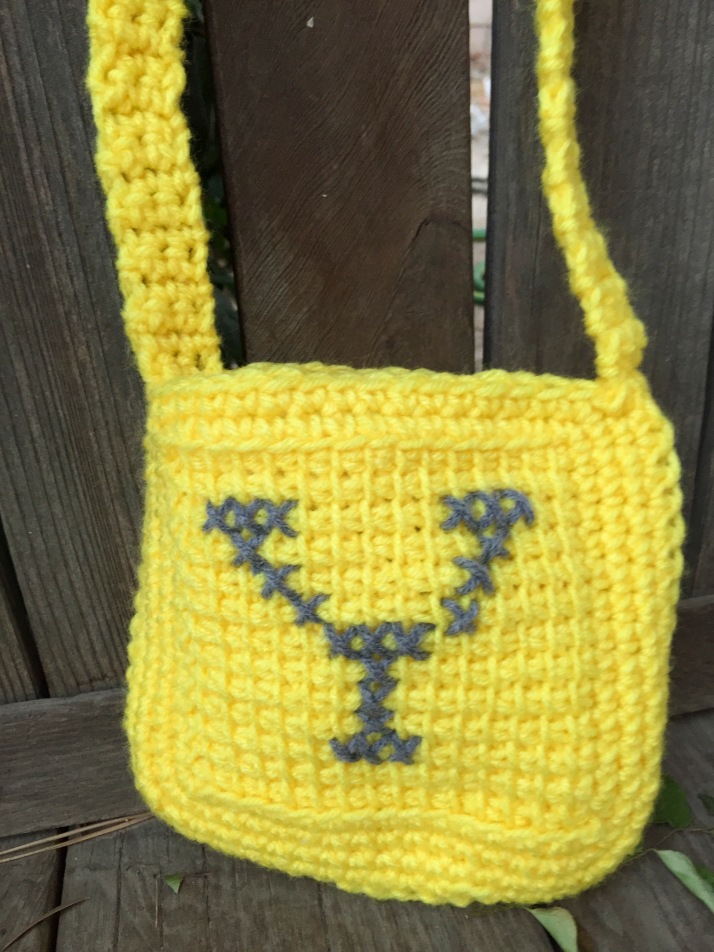 When I was all done NOT working on my other assignments (like I should have been), I was sleepy from all that non-assignment work. So I put my newly minted swatch away and played with my new phone cases. 🙂