So I made this doll back in 2010. I had just learned about Tunisian crochet and I experimented making some dolls with it. I loved the knitted look that could be achieved and since I was lousy with knitting, I wanted to give it a go. This particular doll was my third attempt at making a doll with this style of crochet. When I was done with her, I thought she was ugly (but I never told her that. I wouldn’t break her confidence that way!). I was happy with the overall doll but I wasn’t too happy with her face. I didn’t do such a hot job with her hair either but she was a prototype so I wasn’t too concerned.

What surprised me about this doll was the reaction some family members had to her. My sis-in-law and close friend fell in love with her and kept cuddling her and asked me if she could have her. She begged me for her. I’m pretty sure she begged me for her :-). I still wanted to make the doll an outfit and take some pictures of her. This doll wasn’t intended for anyone. I wanted to keep her as future reference for other dolls but I had written a pattern already and my friend wanted her so badly that I agreed to let her keep her, but not until I was done finishing her up.

Then, my mom-in-law came to visit and had almost the same reaction as my friend. She also asked if she could keep her but let her know that I had already promised her to someone else but that I would make her a new one (I did eventually make her a new one but it took me over a year to deliver, oops!). I told my friend about it in the event she was feeling generous and would want me to give her to my mom-in-law but she said no way.

Well, on a day my extended family gathered for the holidays, I had intended to give the doll to my friend. I had made her a bassinet, pillow, blanket, an outfit and bought her some clothes. My niece saw the doll and asked me if she could have her too. I let her know that it was already given to someone else and besides, I had already given her some dolls I’d made.

I gave the doll to my sis-in-law (notice she is no longer my close friend at this point) who enjoyed her all of 15 minutes before she gave the doll to my niece! In her defense (this was her defense, not mine), my niece came up to her and let her know how much she loved the doll. My niece, 10 years old at the time, looked pretty cute and convincing. My sis-in-law then said, “Well, dolls should be loved and played with by kids. Will you promise to take care of her?” My niece was no sucker and said that of course she would take care of her. My now not so loved (I’m joking of course!) sis-in-law handed the doll over and that was that.

A couple of things went through my mind in that moment. What just happened???!!! Did she really just give away the doll she begged me for to my niece to whom I had already given dolls to? It could have gone to my mom-in-law (it’s never a bad thing to score brownie points with the mom-in-law), who I was pretty confident would not have given her away in less than 15 minutes.

I don’t blame my niece for wanting her and asking for her but I did NOT expect my sis-in-law to cave in so easily! I felt like snatching the doll back up and giving her to my mom-in-law (brownie points!). But then I came to acceptance. What was done was done. She belonged to my niece now. She conned sis-in-law out of it fair and square. My niece reads this blog and she knows it’s true! 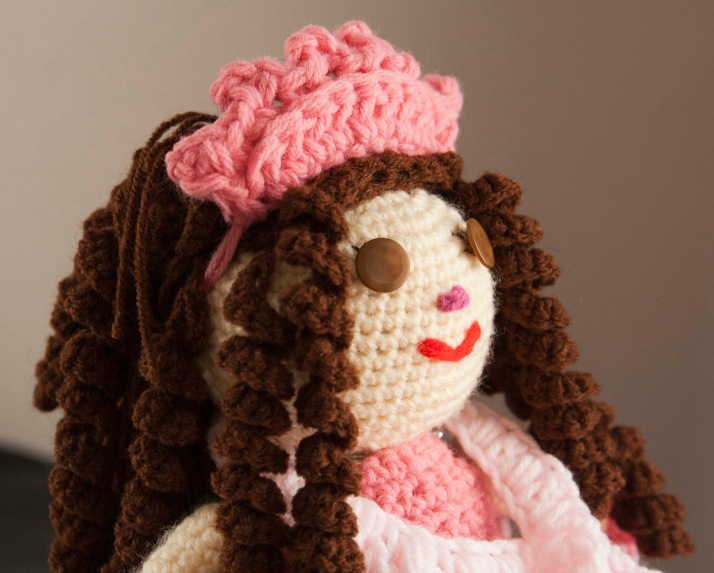 This is one of the dolls I had given my niece. Just in case there was any doubt I gave her good things!

Recall, this was happening at a family gathering so we went back to our revelry. I was sore about it but I didn’t say anything more for over a year. In the interim, my close friend again (we never stopped being close :-))  had asked me to make her another doll since she didn’t have one and I would just smile at her and remind her that she HAD one. About a year later she asked me if I was ever going to forgive her for giving away that doll and make her a new one. This opened up a conversation with a lot of silliness and ridiculousness flying around. Mind you, we were laughing about it but I was serious! But I was also over it. She said she felt guilty for wanting it when there was a child who wanted it too. I reminded her that that child had an auntie that was already hooking her up. We buried the hatchet and I made her another doll. 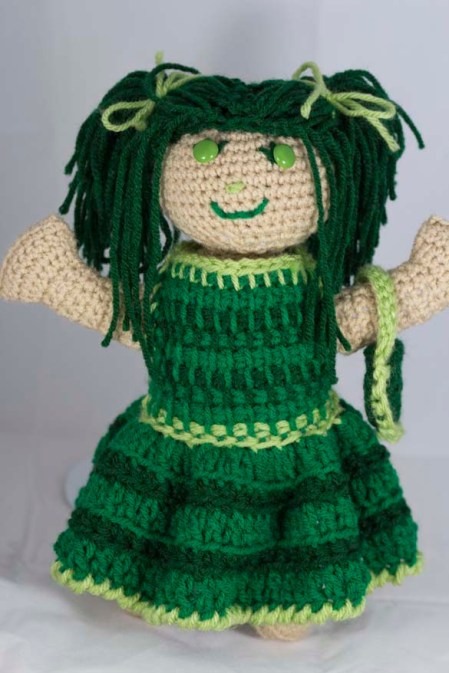 This is the doll my sis-in-law AND close friend received. She still has it. 🙂

Fast forward a few years later and I was talking to my oldest Sis J (who recently passed) and in the course of a conversation we were having about what crochet projects I was working on, she told me that she had the baby doll. Wait, what???!!! So now my NIECE gave the doll away? I asked Sis J how she ended up with the doll and she said my niece didn’t want her anymore and so Sis J took her. This sister loved crochet and couldn’t get enough of it. She always wanted me to make her things. I gave her items like blankets, clothes, dolls and all sorts of other things. She was also known to not always tell the truth and she wouldn’t show me the doll so I wasn’t sure she really had it. If she did have it, and my niece just gave the doll to her, I was really miffed. If my niece had outgrown her (this was a few years later) then I would have wanted her back. But I wasn’t necessarily miffed with my niece. The doll was hers at that point to do with as she pleased. I was miffed with the situation. Namely, that the doll would end up with someone who I would not have given her to to begin with, again! I would have made this sister a different doll (and did) but I wouldn’t have given her that one.

Hoping that it wasn’t true, I asked my other Sis M (my niece’s mom) if I could borrow the doll from my niece. I was writing a book on that style of doll and I really wanted to look at it and get some better pictures of her. The original ones I took were snap shots and I needed something better. I was hoping the doll was in her possession and still in good shape.

Well, that’s when I got the real story. Apparently, my Sis J conned my niece out of the doll with guilt. That made more sense if you knew my sis J. Ultimately, my niece was made to feel guilty for not giving the doll to Sis J (she pulled the diabetes card) and that’s how the doll ended up in her possession. I still wanted the doll back for the reasons mentioned so my Sis M said she would ask our Sis J if she could borrow the doll for a short time so I could do a photo shoot (at which point I would conveniently forget to give her back). Remember, my Sis J wouldn’t even let me see the doll when she told me she had her! My Sis M is closer to my sis J so we thought we had a better shot of getting the doll back. No dice! Sis J told her no! Well, I didn’t think I was getting her back, not from Sis J, anyway. Since she loved crochet dolls, I just hoped she got pleasure out of having her and she did con my niece fair and square so the doll was hers now.

I told my close friend (see, she’s still my close friend in spite of setting all this in motion) about it and over the years it became a joke between her, my Sis M and me that we were going to go visit my Sis J and dollnap the doll. It involved intrigue and sneakiness. Possibly some conspiracies too. But we never managed to pull off the heist.

Now years later, my Sis J has passed and my Sis M and Sis J’s children were cleaning up her house and found the doll. With permission from Sis J’s family, Sis M was able to bring her back to me without any heists involved. The doll has come full circle. She’s a little beat up but I’m fixing her up and boy has she got a good story to tell.

I pondered (for about a second) whether I should go ahead and give her to my mom-in-law but I decided against it. I’m going to keep her. She will always remind me of my Sis J and how in the end she managed to get that doll!

And all this over and ugly doll (but don’t tell her that! She still doesn’t know). 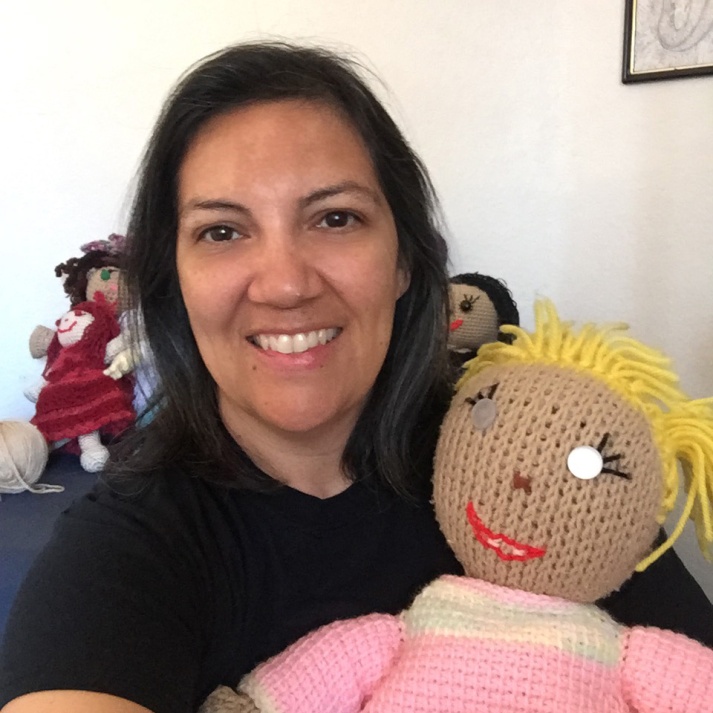 It’s a sad time for my siblings and me but we’re helping each other through it. It’s a bitter sweet thing in getting this doll back. I chuckle to myself imagining that my oldest sister J is giving me the stink eye from the afterlife because we found her doll. But maybe she doesn’t mind ;-).

P.S. I love all parties mentioned in this re-telling of events and hope they forgive me for sharing my version of it. I know they all have their own point of view on what really happened…But I’m sticking to my story!

5 thoughts on “The Prodigal Doll Returns!”