I have a queue of projects I’m supposed to be working on but after finishing my mom-in-laws baby twins, I didn’t work on anything for a while. I got home from work one day as tired as I usually am, plopped down in front of the TV to catch up on my stories and felt guilty I wasn’t working on something. I ease my guilt of watching too much television by multitasking and making crochet projects while I watch. It makes me feel like I’m not wasting my time in front of the television. I mean, I could be doing laundry or cleaning the bathroom but hey, I’m making something here, right? I’m accomplishing quite a few things at the same time. I’m resting from a hard day at work. I’m avoiding housework guilt free and I’m making something useful while deleting all those saved shows taking up all that space on my DVR. Who knew crochet was so useful 🙂

So, Elsa is being created. I experimented with a head shape I liked and came up with this: 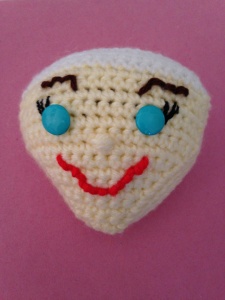 It came out a little bigger than I expected but I like it. I don’t usually do eyebrows on my girl dolls, just eyelashes, but Elsa has these really defined brows so I went for it. I have to admit I have to practice with the mouths. My embroidery skills aren’t the best and so I keep the mouths pretty simple. This usually works for me but in this case, since I’m trying to make it look like Elsa’s, I find my skills lacking. But, it’s loosely based so I won’t be too hard on myself.

Next came the body. I was very pleased with it until I was done and had to attach it to the head and realized it was too small for the head! I couldn’t decide if I would just use it anyway or make another bigger body. I was too lazy to start over so I went ahead and attached it. Then I regretted it. It looked too small!

Oh well. The show must go on. It’s a prototype anyway so I’ll make sure the next one matches better :-). This type of angular head tends to be wobbly when attached so I tried something new (to me) to give it stability. I used the sewing tail to go from the neck through the head to the top of the head and back down to the neck. The head was definitely more anchored to the body this way.

I’m working on the legs and arms. I have one completed leg and almost done with the other one. Normally, I make easy legs and arms by crocheting in the round and making a tube that I stuff and attach to the body. I decided to get a little fancier with both since Elsa is pretty fancy. I’ve seen other dolls made with cute feet so I decided to try my hand at it. With a little trial and error I got something I was pleased with.

I wanted to make it look more like a foot this time.

For the arms, I wanted to experiment with fingers. I did promise my sister a doll with hands that had fingers (that was supposed to be my next project, oops!) so I thought I would perfect my technique on this one. The results were satisfying. 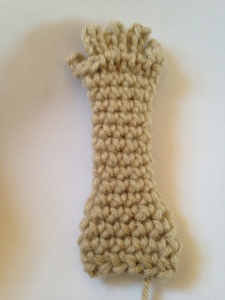 This is a prototype.

I’ve been dreaming up how I want to make her outfit. Hopefully the outfit I make will make that big head less noticeable!

The hair is making me nervous. That’s what’s going to sell this doll as Elsa. I’ll probably leave that part for last 🙂